Launch of the new children’s book Tyenna. The Hobart Bookshop presents Julie Hunt and Terry Whitebeach with an introduction from Daniela Brozek discussing the book and what they have learned about the Tasmanian environment. 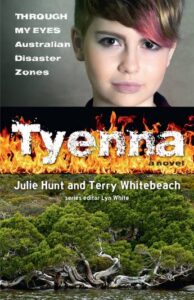 An engaging and suspenseful novel about one girl’s experience of the terrifying Tasmanian bushfires.

They huddle low, nostrils burning from the smoke. A wave of despair flows over Tye. Nothing will survive this firestorm. The bush and everything she loves will be lost.

It’s the summer holidays, and Tye is staying at her grandparents’ lodge at Chancy’s Point in Tasmania’s beautiful Central Highlands. But her plans for fun with best friend Lily and working on her pencil pine conservation project are thwarted as fire threatens the community and the bush she loves – and when Tye discovers Bailey, a runaway boy hiding out, she is torn between secretly helping him and her loyalty to her grandparents.

As the fire comes closer and evacuation warnings abound, Tye is caught up in the battle of her life. Will she and Bailey survive? What will happen to her beloved pencil pines and the wildlife at risk? Can she and her close-knit community make a difference in a world threatened by climate change?

Julie Hunt loves storytelling and traditional folktales. Her stories combine other-worldly elements with down-to-earth humour. She loves travel and is fascinated by landscapes and the tales they inspire. This interest has taken her from the rugged west coast of Ireland to the ice caves of Romania where she collected ideas for her graphic novel, KidGlovz, illustrated by Dale Newman. KidGlovz won the 2016 Queensland Literary Award and her latest novel, Shine Mountain, was shortlisted for the 2019 NSW Premier’s Award. She has received many awards and commendations for earlier books, including winning Readings’ inaugural Children’s Book Prize for Song for a Scarlet Runner in 2014 and the Children’s Book Council of Australia Picture Book of the Year Award for The Coat, illustrated by Ron Brooks, in 2013.

Dr Terry Whitebeach is a Tasmanian writer, historian and community artist who has performed, presented conference papers and taught creative writing in community, workplace and educational settings. Her publications include poetry, radio plays, novels for young adults and biographies or life histories. Trouble Tomorrow was her fourth collaborative project with Sarafino Enadio.

Series editor and series creator Lyn White has extensive experience as a primary school teacher-librarian and EAL teacher and in 2010 completed postgraduate studies in Editing and Communications at the University of Melbourne. Lyn is passionate about children’s literature and has great expertise in engaging students with quality texts. Her work with refugee children motivated her to create the acclaimed Through My Eyes series of books set in contemporary war zones. Lyn created and edited the Through My Eyes – Natural Disaster Zones series to pay tribute to the courage and resilience of children who are often the most vulnerable in post-disaster situations. Lyn continues to teach EAL and is an education consultant and conference presenter.