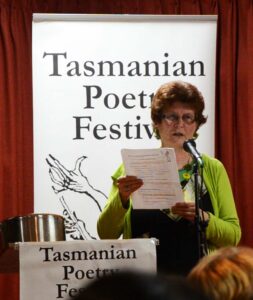 … he said.I choked on my pita bread.Aaah … so you’re saying you’re smarter than me?He said, ‘don’t question my intellectuality’ …. “

“Hello? Hello, look I’m…. Can I call you back in a minute? Well a little less than a minute….”

Pity about the fuzzy pic….And too far off to catch Colin’s passing remark to Tim Thorne which is possibly along the lines of … “Three, Mr Thorne, three!!! Catch me if you can.”Colin Berry and Tim Thorne: Tasmanian Poetry Festival, October 2012

“[Dael Allison] … has a talent for poetic achievement in spades, she has a verbal dexterity, a capacity for piercing startling imagery, an eye into the human soul and the quick of the natural world that cuts through to the exposed heart of things.” [PETE HAY]

PETE HAY: “Earlier I said that this collection’s a sort of interior biography of Fairweather. I hope in saying so I haven’t left you with the impression that this is a work of history cut up into stanzas of poetry, because nothing could be further from the truth. There is a sublime poetic imagination rooting through these pages. All the poetic liberties are taken – as they should be – not to muddy an extraordinary man’s history, but to probe as an incoming tide the dark holes in his life … those untouched by any catalogue of facts … those where the crabs and sea corals live.”

PETE HAY: “… I love that poem for the very exuberance of its language. In my view, too much Australian poetry lacks exuberance. Perhaps I’ve been reading Neruda and Lorca and the Spanish language poets for too long but what I love about them is that they run huge risks in the very way they deploy words and images. And we mostly don’t. I once asked one of Australia’s most venerated poets via an anonymous question from the floor whether he agreed with the characterisation I’ve just given you. And I didn’t expect him to agree with it but to my surprise he did. But then he went on to defend it, saying that we live in a spare, dessicated, cut-down land. And that it’s appropriate that we write a spare, dessicated, cut-down poetry…. “

“… Well, look outside. This is not a spare, dessicated, cut-down land. It’s dramatic, it’s topographically complex, it’s green, it’s wet, it’s springing with intricate life and if you go to the northern tropics it’s the same. If we must take our Australian writing touchstones from the Australian landscape – and of course we should – we need a much more nuanced and variegated sense of what that means. Even the dry, dessicated deserts of the interior are, I suspect, somewhat more robust and more emotionally extravagent and more vital than my poetic informant gave credit for. So: more blood in our poetry please, more spring in its step, more – consequence be damned – passion. And here it is. Dael Allison writes as I would want Australian poets to write – not exactly like Dael Allison because I want Dael Allison’s voice to remain gloriously unique, but you know what I mean here…. “

DAEL ALLISON: ” … Pete Hay. He’s a wonderful environmentalist, he’s a wonderful poet, he’s a passionate promoter and defender of Tasmania and of the arts and I just feel so blessed that he came and launched this for me, especially as an hour and a half ago I was thinking, where the bloody hell is he? I was sending out messages to Cameron saying you might have to do this and then I got a phone call saying ‘Oh I’m in Campbelltown, I’ll be there in an hour…. ‘ :)”

” … I’ll just do one more short one, I’ll be reading a few more from this tomorrow. This is towards the end of Fairweather’s sixteen day raft trip where he was getting very hungry – and completely waterlogged, his fingers and toes were just bloated and things weren’t looking good. He was at this stage fearful that he would miss land and drift into the Indian Ocean and die – and he very nearly did do that. I said this afternoon when I read some poems that he had some companions on the way – sharks, the cormorant that Pete read about, and little terns. This one is called, ‘At night my bed is hooked’ “

“Just to finish: Ted Hughes, who I know it is not politically correct to like – and I am a feminist … but you know, I think he’s a pretty amazing person, I thought Sylvia Plath was a pretty amazing person too – Ted Hughes said poetry belongs to the people who read it, in the same way that a house doesn’t belong to the builders, the house belongs to the people who live in it. These poems are for you, if you want to read them, to make of them what you will. Thank you.”

“I was at some party last night. And someone asked me – you know – why did your marriage end? I said, well I wrote a book about that. But the simple answer maybe is this poem; it’s called ‘Palinome’. “

“I lie with the future curled and still inside of me… “

“Must make a mental note not to build up a poem like that again. I think I’ve got two or three minutes left – ONE minute left? – one minute left. Maybe I’ll read something fast, how about that? I wrote this poem in Tasmania and … you guys have got an amazing festival here, just beautiful. So this is my Tasmanian poem.”

“I don’t know if I’m going to shock you. Maybe … oh before I start, I think it’s important to say ‘thank you’ to Cameron, to Sonja. You’ve done a bloody marvellous job. And everyone else who helped out, you guys have been amazing, you’re really on your game. Anyway, the first one: ‘He had whisky….’ “

“I’m going to do a poem about an orgasm. I was asked to be on a compilation CD, and the guy gave me very specific instructions about what he wanted – which was, don’t mention any body parts, don’t mention sex, I want to hear about the orgasm, just the orgasm, just the sensation. Okay, I had to have a few cracks at it so to speak, but this is what I came up with: ‘The Big O’…. “

“I’m going to do one more poem – is that alright? – it’s called ‘Fireflies’. I wrote this because one of the joys of this job – if you call it a job, being a poet – is that you get to work a lot with kids, you know, disadvantaged kids, I get to do that around Victoria and NSW a lot and I wrote this poem for my students. Another thing to note about this actually – this is going to sound like the most wanky, pretentious name-drop ever: and it is! – but Russell Crowe contacted me about this poem, which is bizarre and I like to boast about that because it’s not every day The Gladiator himself tells you that he likes your poetry. Anyway….”

“She said, as a child I lived in the mountains…. “

“Good evening this is your captain speaking. We’re now…. “

“Earlier this year I won the World Poetry Cup with this poem…. Basically, there’s a dirty word in politics and we’re not allowed to talk about it very much – that word is Palestine. And when we do it must be extremely tempered. I think that there are many reasons for that but I think that one of them is Islamaphobia which is rife at the moment for various reasons. I feel the need to say that I don’t come from an Islamic family, though I do come from a Middle Eastern family; but I believe in standing up for humanity and putting a human face to the things that the media so readily makes grotesque.”

“I am my grandfather’s memories
of sunshine, streaming, through olive trees
of women…. “

CAMERON HINDRUM: “The festival of course does not happen in isolation. It’s not the work of one or two people it’s the work of a whole team and I’d like very much now to publicly acknowledge the work of Tim and Stephanie Thorne…. “

“Steve is a wonderful, wonderful guy. He’s been on the journey with me pretty much all the time – this is my tenth festival by the way – and Steve has been there for much of that time and I couldn’t do it without him, thank you very much for your efforts…. “

“Marilyn looked after the bookstall for us yesterday – and was also an airport pickup person on Friday. Friday was one of those days from hell for a festival director, I had cancelled flights to deal with and people going all over the place and so Marilyn got several quite confusing text messages: you’re not picking her up, you’re picking him up … but you’re picking her up later … no, you’re not picking … you’re just picking…. Go to the airport and find someone and bring them back to Launceston. Someone who looks like a poet, anyway….:)”

“… I’d also like to present you with something you probably saw on the bookstore table, my beautiful wife Sonja’s designed some QR code badges from a great piece of myrtle. QR Code for those of you who don’t know is ‘Quick Response’ Code, you scan it with your smart-phone and it’ll take you directly to the Tasmanian Poetry Festival’s website :)”