Welcome everybody, and thanks for having us, Janet and Chris! 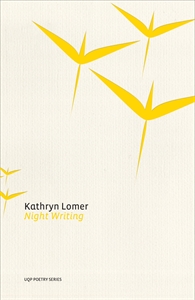 I feel honoured to have the opportunity to launch Kathryn’s third collection of poetry, Night Writing. Kathryn and I have bumped into each other over the past fifteen or sixteen years, but it’s really only recently that we have begun to know each other as friends. I first met Kathryn at another launch of poetry, fifteen or sixteen years ago, when she was working on one of her major works to date, and that was her son, Cormac.

Most of you probably know that Kathryn grew up in Tasmania’s northwest, in Sassafras. As a girl, she lived on a farm and she rode horses. I imagine that she had the kind of growing-up that I would have longed for in the dry and depleted western suburbs of Sydney. Kathryn says that she always wanted to live on a farm that rolled down to the sea, and her poetry is full of that sort of generosity and luxuriance. She was recently paired with Patrick Grieve in a collaboration of visual and literary art exhibited at the Dick Bett Gallery. I have looked up Patrick’s paintings on Google Images, and I have seen how, in most of his paintings, there is a small margin of landscape at the bottom of the canvas, and above it, sky, sky and more sky. Perhaps this north-westerly feeling for space and light partly explains Kathryn’s feeling for the light and “lightness of being”, which two elements imbue her poems. In Kathryn’s case, however, the lightness of being is not unbearable, but uplifting and inspiring. After all, to inspire means “to give breath”, and, rather than feel as though you are closed up inside an elevator with this poet at floor 13 1/2, as one sometimes does with contemporary poetry, you feel more that you are racing across open fields and down to the shoreline, with seabirds squaarking overhead.

As a school student, Kathryn attended St Patrick’s in Latrobe. She especially enjoyed grammar and geometry, despite the limited expectations of the Irish nuns (expectations that my own mother quite cynically described as bringing up good little housewives). Kathryn and I discussed the role of Catholicism in the creation of poets, she herself theorising that poetry, perhaps, fills the “God hole” that is left behind after the Catholicism is removed. On my own part, I think of Catholicism as a culture more than a doctrine, though doctrine was certainly part of it in our early lives. However, just as it is difficult to separate the Jewish or the Moslem poet from his beliefs, his history, his culture, music and sense of humour, so Catholicism is all-encompassing, even after the God-splinter has been removed by the tweezers of rationalism. I have always thought that a childhood and upbringing that provides a language for the metaphysical cannot be all bad.

Despite achieving a wealth of awards and publications, and her wonderful sophistication, Kathryn is an honest and unpretentious poet who uses her art to include readers, rather than to exclude them. The Australian/Canadian poet, Edith Speers, uses one of Kathryn’s collections as a text in her job teaching students in Dover, and I understand why she would choose these poems to reach students growing up in an isolated community, where abalone diving and fish-farming are the main lifestyles, and the icy waters of Antarctica wash strange sea-creatures up onto the beach. Kathryn’s poems are accessible. They are learned, but in being so, they are learned about tangible things. Kathryn describes her pursuit of “the well-furnished mind”; reading non-fiction books and listening to Radio National and logging on to a website called Brain Pickings, she avoids the romantics’ disdain for the concrete, as exemplified in Oscar Wilde’s “The Importance of Being Earnest”, when Jack confesses to Lady Bracknell that he knows nothing:

Jack.  [After some hesitation.]  I know nothing, Lady Bracknell.

Lady Bracknell.  I am pleased to hear it.  I do not approve of anything that tampers with natural ignorance.  Ignorance is like a delicate exotic fruit; touch it and the bloom is gone.

Kathryn, herself, is not a descendent of the ignorant upper classes, but of an Irish diaspora enamoured of the ancient gods, as were, and still are, the Celts.

In the poem, Measure, Kathryn writes:

I used to make shell necklaces on Hawley Beach,
my mother saying fairies made the shell holes
to help little children do just that.
I tell my son sea urchins
drill a hole to get at food inside.
Truth is also extraordinary.

From the first poem in Night Writing, I was convinced that I would love this book. The poem, Gilded, is one of the few coming-of-age narratives I have read or seen about girlhood that captures the difficult combination of a girl’s wish to escape growing up, and her realization of the power inherent in her femaleness. This poem introduces Kathryn with a sexy kind of humour, a playfulness and tenderness, and also a brutality, that I just loved.

Kathryn tells me that her times for inspiration have been in bed, in the bath, on the bus, and breastfeeding. The theme of motherhood as a fierce and sexual drive is present in “Lion”:

As a new mother I took on a totem,

a creature whose traits I admired.
I chose leopard: beauty, strength for the fight,
speed for flight […]

Besides motherhood, this is a poem about truth and courage.

And, again, in Compass, she says:

This is one way to say it:
the woman had a child
and everything changed.

For me, these lines are reminiscent of Stan and Amy Parker in Patrick White's The Tree of Man;- and they are similarly portentous and Biblical in their delivery.

Now I must mention the ever-present light in Kathryn’s poems! Not for this poet the never-ending dirge of the post-modern nihilist. Kathryn’s poems are an intelligent delight, buoyed by optimism and perspective. The light that she loves and the lightness that she creates, reflect the generosity of spirit that so artfully enriches her writing.

Clouds are always made of the same stuff, she writes, in Compass:

They look white
because the light’s refracted.
It’s always about light.

And, again, in The Passion:

Light gives us life this is the miracle.
I know these rays are a scattering of light
by water droplets and other particles;
they’re called crepuscular:
god is in the words.

I loved the intense sexuality combined with the sacred in Passion, which, again, is distinctly Orthodox:

I liked that word, worship,
and all the kissing that went with it-
garments, feet, the ground on which Jesus trod-
plotting, even back then, a passionate life.

I guess I am not fond of the word “sensuous”, as, for me, it conjures up images of women’s legs exiting expensive European cars accompanied by saxophone solos, but the English language provides few words to describe the ever-present physical delight expressed in Kathryn’s poems. In the title poem, Night Writing, she says:

I will send this parchment to you, soon,
for what good is my skin
without your hands?

Finally, in Ice sculptor, I think Kathryn describes her own art with the lines:

You would go full circle through lust, power, humility
and back to where you are what you can be,

cut out for this art.
And the light will shine through your work

and people will breathe onto it their cloudy breath[…]

In his book, A Book of Luminous Things, Czeslaw Milosz points out that….In old Arabic poetry love, song, blood, and travel appear as four basic desires of the human heart and the only effective means against our fear of death. Somehow, Kathryn has managed to cover all four in this extraordinary collection. There is love, there is place, there is wonder, there are pain, fear, loss, change, evolution, knowledge, music, art, and beauty…I have read the collection at least three times since Kathryn gave me a copy, and like all true art, it is fresh every time I go back to it. It represents an enormous amount of work and skill, and it so generously lets us in on Kathryn’s inner world. I have still not finished delving into it, and will keep it by my bedside for further exploration.

Congratulations on this wonderful collection. I will conclude with two lines that I have chosen from Kathryn’s poem, Event Horizon, which, I think, are at the very core of Kathryn’s insight, wisdom, humour, love and optimism:-

There is no reason why this day will work,
but days are all we have.

Philomena van Rijswijk is a poet, novelist and story-writer living in Tasmania. Her most recent novel, The World as a Clockface, was published by Penguin. Her poems and short stories have been published in collections and literary journals in Australia, Ireland and India. Her work was included in Best Australian Stories 2002 (Black Inc) and Best Australian Poetry 2005 (UQP). Her poetry collection, Bread of the Lost, was published by Walleah Press in December 2012. Philomena blogs at The Lady of the Swamp.