Pete Hay lives in Tasmania and writes of place, islands, environmental activism and environmental thought, as well as poetry and personal essays. Poetry publications include Meeting of Sighs: The Folk Verse of Victoria’s Western District (as editor), The View from the Non-Members’ Bar, Silently On The Tide, Last Days of the Mill (co-authored with the visual artist, Tony Thorne), Girl Reading Lorca and Physick (Shoestring Press, Nottingham, England: 2016). His ‘other’ writing credits include Main Currents in Western Environmental Thought, A Companion to Environmental Thought, Vandiemonian Essays, The Forests (with Matthew Newton) and Forgotten Corners: Essays in Search of an Island's Soul. Last Days of the Mill was shortlisted for the 2013 Tasmanian Book Prize, and won the Peoples’ Choice Award. His website is at Pete Hay Writer 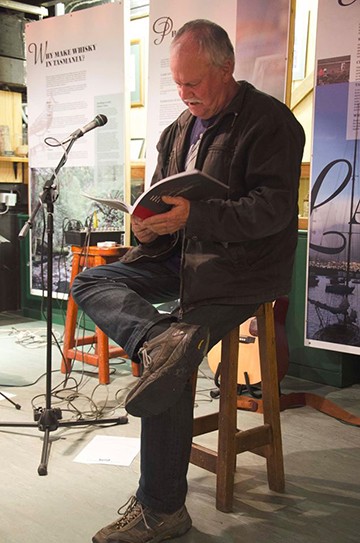 REVIEW OF 'SILENTLY ON THE TIDE'

POETRY FROM 'SILENTLY ON THE TIDE'

Sunset on the Irish Festival

Conversations: An interview with Pete Hay and Richard Flanagan (1995)

KNIGHT, Karen: Postcards from the Asylum

MATHISON, Robyn: To Be Eaten By Mice

ROBERTS, Bruce: In the Church of Latter Day Consumers

What I did on my Holidays