LAUNCH: WOMEN OF THE ISLAND


A trio of Tasmanian filmmakers, Rebecca Thomson, Lara van Raay and Ninna Millikin, launched 'Women of the Island' - a series of short online documentaries about the women who inhabit the island of Tasmania - in North Hobart, Wednesday 23rd November, 2016. 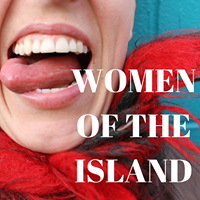 The evening was also a fundraiser for the series of documentary films Women of the Island hope to film over the next two years. Each episode will feature a different woman and a different story, offering stories of bravery, resilience, humour, innovation and strength; loud stories, quiet stories, stories of darkness and stories of light, stories of the original women of the island and stories of those who have arrived recently seeking safety on this land ... 'stories as diverse, complex and interesting as the women themselves.'

Speaking at the project's launch, Rebecca Thomson said the trio had been overwhelmed with the enthusiasm and generosity shown them. 'Our inboxes are overflowing with amazing stories submitted to us. People have nominated people they know, other people who've shared their own stories, it's been exciting and also really humbling.'

'Our plan is over the next two years to make twenty of these short films all telling a different Tasmanian woman's story. We want these to go to the world, so they're going to be online - we're going to build a beautiful website to house them. We are lucky enough to be living in a day and age where cinemas and broadcasters are not the gatekeepers to the audience any more. We can make something in Tasmania and upload it for it to be viewed all over the world. It's really empowering; we want to tell Tasmanian stories that have themes which resonate with human beings everywhere.

'That's the core of what we want to do, but we're also excited about collaborating with other creative females in Tasmania - photographers, musicians - and we have other plans, branches to this project.... We're interested in mentoring other women to get the craft skills to be able to tell stories through this medium as well. It's a very exciting project.... '