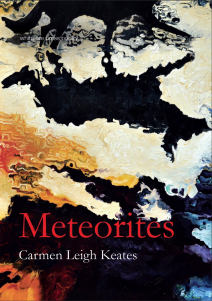 I want to start with the words ‘strange activation’. Because reading Meteorites, this debut collection which I’ve been waiting for since I first met Carmen back in 2010, put me on the verge, like in Tarkovsky’s film Stalker where Writer sits on the edge of the well. Meteorites put me on the verge of the objects around me, the fragments that lie in the soil of my Ballarat backyard, the bits of china plates that I dig up from time to time, along with the bits still buried that I’m yet to discover.

Ballarat sits upon the rubbish of the diggings, on the edge of thousands of deep mineshafts. Who knows how many there are!? They are dark corridors that run beneath our streets and under our homes. They are of the past, and we often forget about them, until a big rain comes and their mouths suddenly open up to swallow our pets or trampolines. These mineshafts surprise us because we don’t think of them as being active, but they’re like slow train passages, filled by the past, encountering the present, gradually moving and collapsing between the two all the time, while also going nowhere. It’s the same way a piece of rubbish might slowly become a relic, might be lost until found again, being both new and ancient, priceless now because it was complete rubbish. Or like us, who are realised by the past, by memory, by dreams, in each new day of our lives.

It’s because I’ve been strangely activated by Meteorites. So now I’m sitting beside the wells and portals, the holes and mirrors that open up in this collection. Carmen has alerted me to them in my living, the way a master film director subtly manoeuvres our expectations, using perfect frames to shift and slide us into new kinds of waking. It puts me on the verge here at Collected Works, almost able to pinpoint the way she’s done it.

But I’d also like to talk about my back.

My back’s a lot better than it was. I mean, it was really bad there for a while until I saw my chiropractor. I remember one warm night beneath a clear, evening sky, standing out in my back yard beside the trampoline. It was late and I was drinking. Okay, I was really drunk, totally smashed, but the chickens were in their coop and our pet rabbit who free ranges in the yard was somewhere out there with me, nibbling on the dark grass. When all of a sudden I saw a fireball raging across the sky. It was bright, it made daylight it was so bright, and it stormed across our rooftops for what seemed like forever.

I expected to read about it in the paper the next day, but I didn’t, there was nothing. I could have been the only one to have seen it. So I feel completely lucky that I was out there, except that I was drunk which meant I slowly began to topple over. I felt a huge pressure start driving down on my back which I couldn’t resist. I couldn’t correct myself, all I could do was give in to it, so I kept falling slowly, further and further, until I dropped onto the concrete and threw my back out.

Now my chiropractor is a very attractive woman, extremely attractive, so I always love seeing her, but it only ever happens when I’m in pain and extremely vulnerable. It was also a shame that I’d have to tell her my embarrassing story about drinking alone and falling over like a geriatric. So instead I told her that the meteorite cosmically pushed me over.

Thankfully she listened and kept typing the whole time, nodding her head up and down as if my story was completely plausible. I only hope she recorded it in the vivid detail I described, although she’s since changed practices and wasn’t allowed to take her patient files with her, so the story is buried now in a computer system somewhere, waiting for someone to discover it, read it, and witness my meteorite for themselves.

My story is just as plausible as that of Uvavanuk, the 19th Century Inuit poet that Carmen introduces us to in the title poem of this collection. Uvavanuk, was struck by a meteorite and absorbed its spirit, a spirit that was half bear/half man in form, one that immediately turned her into a poet and shaman. Thanks to this, Uvavanuk knew how to get rid of bad fortune and evil spirits. Carmen tells us she would wave her arms toward them, crying, Away with it! Away with it! Carmen also suggests that we should all try this in our own homes. Personally I think it’s a perfect way to launch a book into the world, so that’s how we’re going to finish tonight. I’m going to ask all of you to join me in ridding this book of any bad fortune.

In fact, on reading this collection I suspect that Carmen might have also been struck by a meteorite. Because she moves through these poems, her direct experience mingling with the ancient. She is in Sweden, then Brisbane, then teleports us back to Sweden. She remembers a passport photo and then is that lost photo, riding her bike with a wishing well portal of mineral water in her front basket, cycling in an ‘upright feverish dream’. She slides us from the past, to her present experience, zooming in and out, panning up and down in expert tracking shots.

In fact reading this collection is like the contradiction of having an out-of-body experience within our bodies. Similar perhaps to echoes, where we hear ourselves from outside ourselves. And echoes occur throughout this work, what I’ll call ‘image echoes’. Because like me, Carmen is in love with images, how they suggest us through space and time.

‘It is beautiful when people don’t mean anything
on their own and they gather in a great pack
such as this, instinctively generating
this feeling in a cathedral whose echo
is the magnifying mirror for the unseeable world.’

That kind of congregation might also describe a book launch. She says…

This ceremony is a live current we’re invited to grasp.

Carmen is fascinated with the magnifying, the leaking through of the unseeable world. She is a woman who hears the sudden shout of another woman, one that …

She goes on to say in Leaking Through…

‘This shout was her
being sideswiped by a trauma
now only represented in my instant vision
as light.’

It really does sound there like Carmen’s been struck by a kind of meteorite.

She returns us to corridors, pathways and passages, to forests, cemeteries and fields. She gives us relics and ruins, one broken knife, and a new axe that she carries home on the bus, asking, ‘is any axe new?’ She goes on to wonder if …

‘…it would walk by itself tonight down/the hall in a strange scissor like stride...’

And throughout this collection she continues tipping us, inverting us, magnifying the world and leaking it through to strangely activate us.

So much so that I had to put the book down and go for a walk. It was a beautiful day in Ballarat. The sun was finally shining again after a long, cold winter, and as I went down the street, thanks to Carmen, I saw for the first time that this world is really just a giant museum. All of it! It’s filled with the living and the dead, the lost and the found, filled with me and everything I’m part of. I realised that I’m in it and constantly visiting it at the same time, from room to room, through memory, dreams and sickness, through every encounter I have with fragments of china plates, with my attractive chiropractor, or with my free ranging rabbit still nibbling on grass in the backyard.

Now we don’t live too far from the site of the Eureka Stockade, so I decided to take the path through the parkland to the museum that they built on top of it. And I was pretty chuffed with the irony of being inside my ‘life museum’ and going to visit a museum at the same time. But I didn’t know that they also had a new exhibition that day. If I went through a doorway I could enter the exhibition which happened to be an exhibition on museums. And at that point I had to stop, raise my arms and cry, Away with it! Away with it! because I was pretty sure my head was about to explode.

But Carmen in her opening poem, 'At the Bergman museum', warned me about this. She says…

‘Artists should be mindful: never trust a memory with an/heirloom.’

In the poem 'Smoke Talk' she says…

‘In one woman’s sand is another woman’s glass shard.’

Which might also be a kind of warning. In fact something lurks in here, something ominous. You feel it in the exceptional poem 'Burning Train' and in the stunning concluding lines of the book…

‘As this poet becomes unconscious
a stratum is formed
and in this layer, memory
is a demon that walks
like a soldier from a tunnel.’

So here we are in Collected Works, which is a kind of museum, with every book a portal. We are with Carmen, the shaman, who is a master opener of portals, celebrating the landing and launching of Meteorites. In reading this tremendous book you might get hit by one, if so, pick it up and throw it back into the book, listening for how deep it goes, because it goes deep, dream deep! Whitmore Press has added another marvellous poet and title to their list. And it’s always worth celebrating a wonderful poet being picked up by an equally wonderful publisher, because that isn’t always the case.

Carmen you are a winner, and like Writer who sits beside the well in Stalker, saying ‘there are no such things as facts, can’t you feel it?’ I will echo him, answering to you:

Yes, I can feel it! Yes, this is your invention and I have gobbled it up like a swarming journalist, editor, critic or endless broads. Yes, I’m demanding more, even if it’s a constant torment for you. I am better because of this book. There are things in it I have seen and there is more that will be revealed. Now the future and the present are one. I am ready for it. Yes, but why not forever? ’ And with that I declare Meteorites launched. Please join with me now as we raise our arms and all cry together, Away with it! Away with it!

Nathan Curnow is an award-winning poet, performer and past editor of Going Down Swinging. His previous books include The Ghost Poetry Project, RADAR, and The Right Wrong Notes. His most recent collection The Apocalypse Awards (2016) is inspired by the absurdity of the modern world and charts our collective obsession with the end times. A recipient of the Josephine Ulrick Poetry Prize, his work is published widely in Australia and overseas and features in Best Australian Poems 2008, 2010 and 2013.