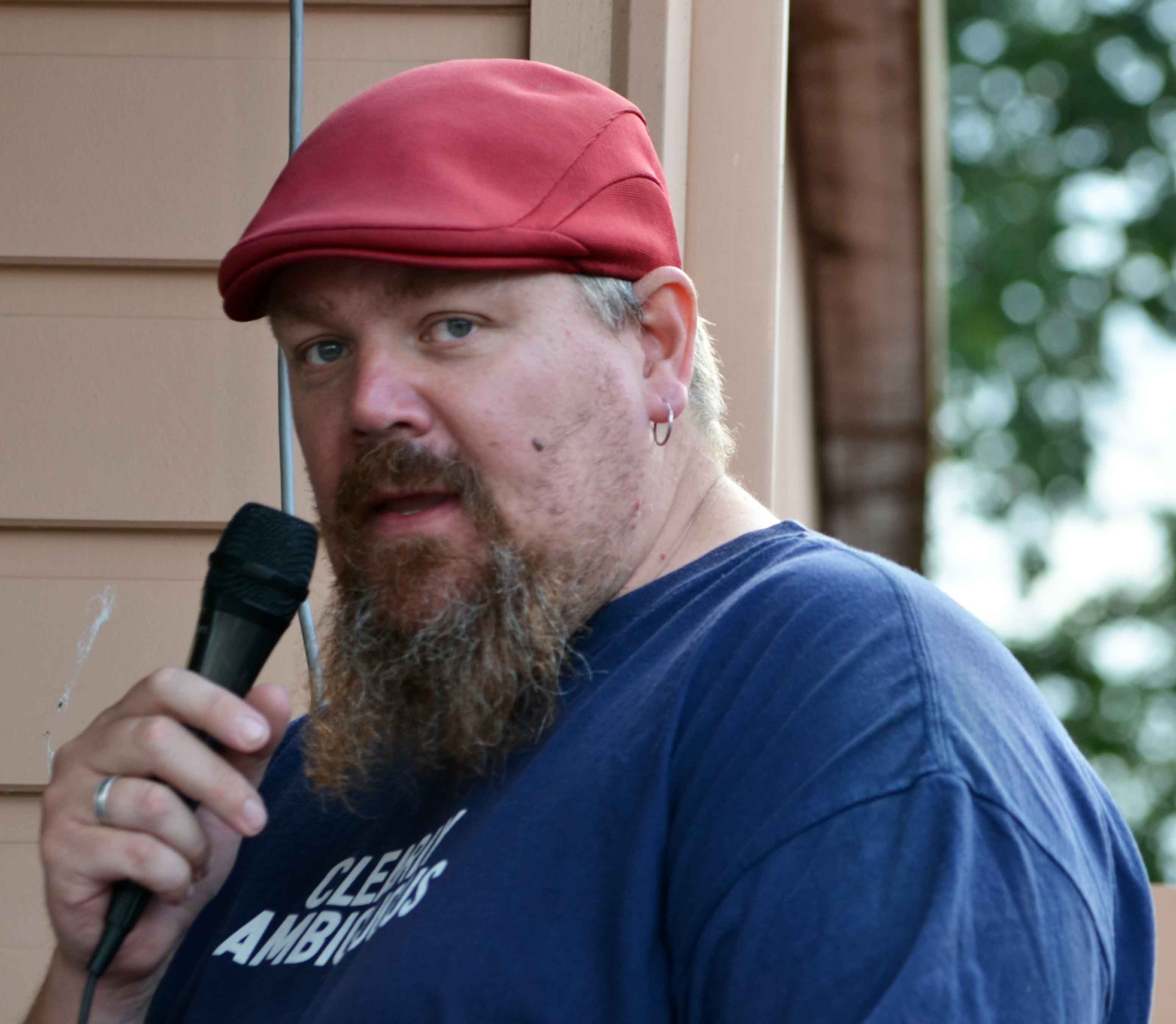 Cameron Hindrum, who for a decade was Director of the Tasmanian Poetry Festival, wears multiple hats. He's president of local community theatre company Three River Theatre, and relishes the chance to perform when the opportunity arises. He's a playwright and a poet, he's sought after as compere of local literary events. Neither microphone nor audience hold fear for him, it appears — 'For my sins, I'm a school teacher' he's wont to proclaim, which perhaps explains why. When he hosts an event, he's relaxed, engaging, asks good thought-provoking questions.

In Launceston in May, Cameron compered an evening of conversation and poetry with Launceston poet Joy Elizabeth. Joy's published a new book recently, Fragile Friday, launched in March by Nancy Jean Corbett at the Tasmanian Poetry Festival.

'Some of the poets in this room would be among my very favourite poets. But Dorothy Porter would be my out-and-out favourite.'

'I was actually given a verse novel by Les Murray — who I wasn't particularly enthralled with at the time — but really enjoyed it, so I have diversified a bit.'

'And you've written a verse novel?'

'Well, it was actually a short story in verse. I had twenty thousand words, and had to get it down to three....'

This drew a chuckle. 'And you did that by turning it into poetry?'

'I cut it back, but the main thing was that it was probably the best writing exercise I'd ever done because I had to keep honing it — and honing it — until I'd cut it back to three thousand words, in the process even removing a particular poem I really liked.'

Hindrum empathizes. 'That's a standard rule with writers, isn't it, having to kill your darlings? Probably the more you like a piece, the more chance you'll find you have to get rid of it.' He turns to face the audience. 'I don't know if anyone else in the room writes poetry ... ?'

No one does, it seems. Until ... a hand goes up — one solitary youngster within that crowded space.

'Right! And do you find you have to get rid of a line in a poem that you like? When someone says, no, you have to take it out, do you do that? Do you get rid of parts you're particularly attached to?

'Ohhhhhhhhhh.................' A mental readjustment, and Cameron continues. 'Joy, one of the things I like about your new collection, Fragile Friday, is that the poems coalesce very nicely around a series of themes. Was that serendipitous? Did you suddenly find you had poems that arranged themselves together or did you deliberately set out to focus on different areas of your life?'

'A little bit of each I think. I looked at what I had and decided that they would group in certain ways. Then looked further at all the material I'd written over the years to find more that would fit a particular theme. A mixed process, it wasn't something that I did consciously.'

'Did you find yourself editing some of the poems you'd already written?'

'Absolutely! I could still be editing. But my marvellous friend who did all the layouts for me would probably not be speaking to me at this point.'

'What about the title Fragile Friday, what's the resonance or importance of that as a title?'

'It's funny isn't it — I've written a ranga called "Fragile Friday", I'm really bad at titles but somebody in our poetry group suggested it's a good one.'

'Yes, there's a lot to be said for the value of poetry groups and writers' workshops. Writers are always learning, always finding new things to play with in terms of language and influences, even established novelists I know still go to writers' workshops.'

'I think it's a bit arrogant to say, I'm writing a poem and I can do this, but never look at how you're doing it and what might be improved. To me it's a process, a fairly humble process in a way because there are so many people who do beautiful things with words, and I can only aspire to do what I can.'

'That's an interesting point, the idea of being humble.... Given that you mentioned earlier you'd still be editing if you had the chance, do you know in yourself when a poem's finished, or do you simply say that'll do and move on?'

'Way back in the Remington typewriter days, I used to shove a bit of paper in the typewriter and type away and hope they'd end up good. Some of them weren't. The poems in my book are selected from pieces I've written over the past forty or fifty years. I had dismissed much of my earlier work, until a friend who was cleaning out her immense library sent me back some copies I'd given her many years ago and said, I think these are really good. I didn't really think most were but there was one I liked and I have not changed a word ... every now and then you do write something that feels complete.'

'You've written a lovely foreword at the beginning of the collection where you talk about your writing — particularly your writing in this collection — being quite vulnerable. If you're ok answering this question, why do you think that is? Is it because a lot of it is personal, feels quite close?'

'Yes it's very personal, and it's a vulnerable and fragile exercise putting together such personal work.'

(Joy's sense of vulnerability has been well chronicled in her introduction to Fragile Friday, wherein she notes that 'Writing poetry can be a lonely occupation, the poet has a thought, a story, an experience, which finds its way onto a page. Whether it's squirrelled away, performed or published, this very act of writing is an act of vulnerability.')

'Fragile Friday is self-published, tell me a little about that journey.'

'Well it's really down to a number of fabulous women in my life. A friend, when I'd knock off a poem and read it to her, would say 'You've got to put together a collection of poems'. And I'd say, 'Oh yeah.... But they're fairly ordinary, let's not worry.' But I was guest poet at the recent poetry festival and I thought, oh yeah I'd better put together a bunch of poems. So I did.

'But I found it a problem gathering everything together in a document in Microsoft Word ... it didn't happen. So I gathered up my files and said to a very dear friend of mine — sitting over there in the green coat — how can I put these together as one file? She very foolishly volunteered to do that. Even if you don't like the poetry, the book is beautiful ... it's just such a beautiful production and I'm very grateful.'

'I understand that your mother Eileen is to be the subject of your next book?'

'Yes, Family Chronicle is basically based on my mother's and uncle's story of their time in an orphanage. They had eleven children in their care.

'My mother Eileen came from what was Palestine in the 1920s and ended up growing up in Melbourne to be a really bright young woman, determined to change things around her ... her talent was recognised by a lot of people. She became a stalwart in the trade union movement and the left movement, and worked with migrant women in trade unionism. Later, in the 70s, she was involved in the women's liberation movement. She died two years ago in February — and the stories that we were told at the celebration of her life were just amazing, there were things I didn't know, even from friends. She's an important figure in the lives of many of us.' 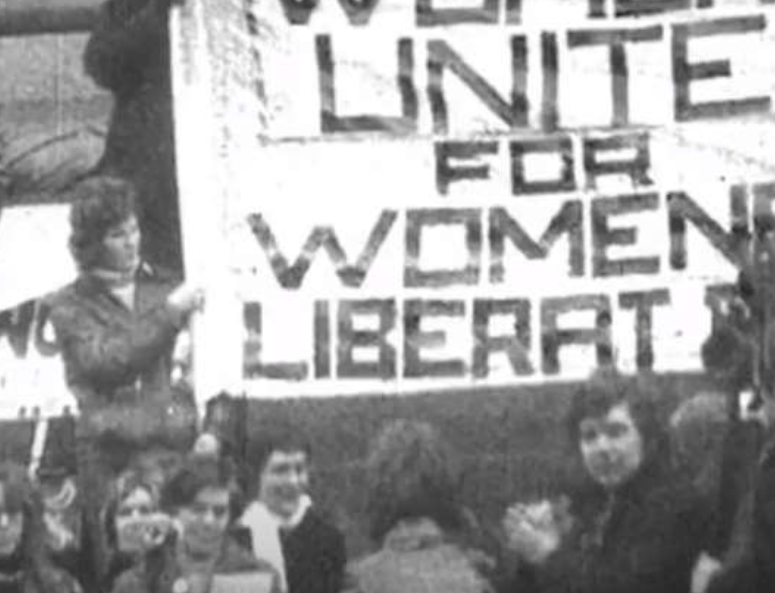 At Cameron's invitation, Joy read a couple of poems — 'Songwriting Workshop', recollections of a workshop held at Cygnet Folk Festival; and 'Release', in memory of poet MML Bliss.

'Magenta Bliss was a fantastic poet. She was involved in helping organise the poetry festival for a while.'

'She was, very early on. I don't know if any of you here had the privilege of knowing her, Magenta was quite a Bohemian character in lots of ways — lived by her own rules, absolutely and uncompromisingly. MML Bliss is the name she invented for herself, her birth name was jenny boult.'

'She published quite a few poems under that name, they were really good — a fierce feminist poet.'

'She had a huge reputation as jenny boult, then she moved to Tasmania and became MML Bliss. And she published quite a few fantastic books as MML Bliss, one of them is called 'Ravo', which is about the Launceston suburb of Ravenswood, and it's just the most magnificent book, gritty and honest — if you ever have the chance to look at a copy walk over broken glass to do it.'

'I'll auction my copy off, ok. So there's a little story behind this poem. Magenta visited my place from time to time, and anyone who knows my house will recall the strip along the side of the driveway. I had bought some marigolds to plant but hadn't got round to it. Magenta wrote me a wonderful poem, saying basically, get your finger out and plant them. So this is called "Release"'.

At last I've
freed them.

It was your poem
with the dirt under
its nails that twisted
my guilt    I'd ignored
those trapped
children.

Burned by your words
my hands knew only
one thing   paper fluttered
to table   I reached
into the blackness
lifted the struggling infants
from their plastic prison
and held them.

Then gradually gently
I freed their bound
feet   teased out
their tangled roots
and planted
the marigolds.

'Thank you Joy. Moving along with another question ... do you read lots of other poets?'

'I don't probably, as much as I feel that I should. But I've a huge pile of books from the poetry festival, and I like to sit in a certain place at home to read them, sit quietly and see what's new. I love people who divulge of themselves, I think Esther - do come and hear Esther Ottaway, she is fabulous! - Esther Ottaway writes personal, delicate poetry.'

'You were talking about vulnerability before and Esther Ottaway personifies that in her work.'

'Yes. I think we're very lucky with our poets. I do read early poets as well, but mostly I read more modern poets, and people I know.'

Joy concludes with a bracket of poems, including 'The student', 'The Blue Bowl', 'Unrequited Love No. 45' and 'Unrequited Love No. 64'. 'I'd like to end up by reading a love poem....' she continues, but is cut short by an interjection from someone in the audience. 'They all were!' 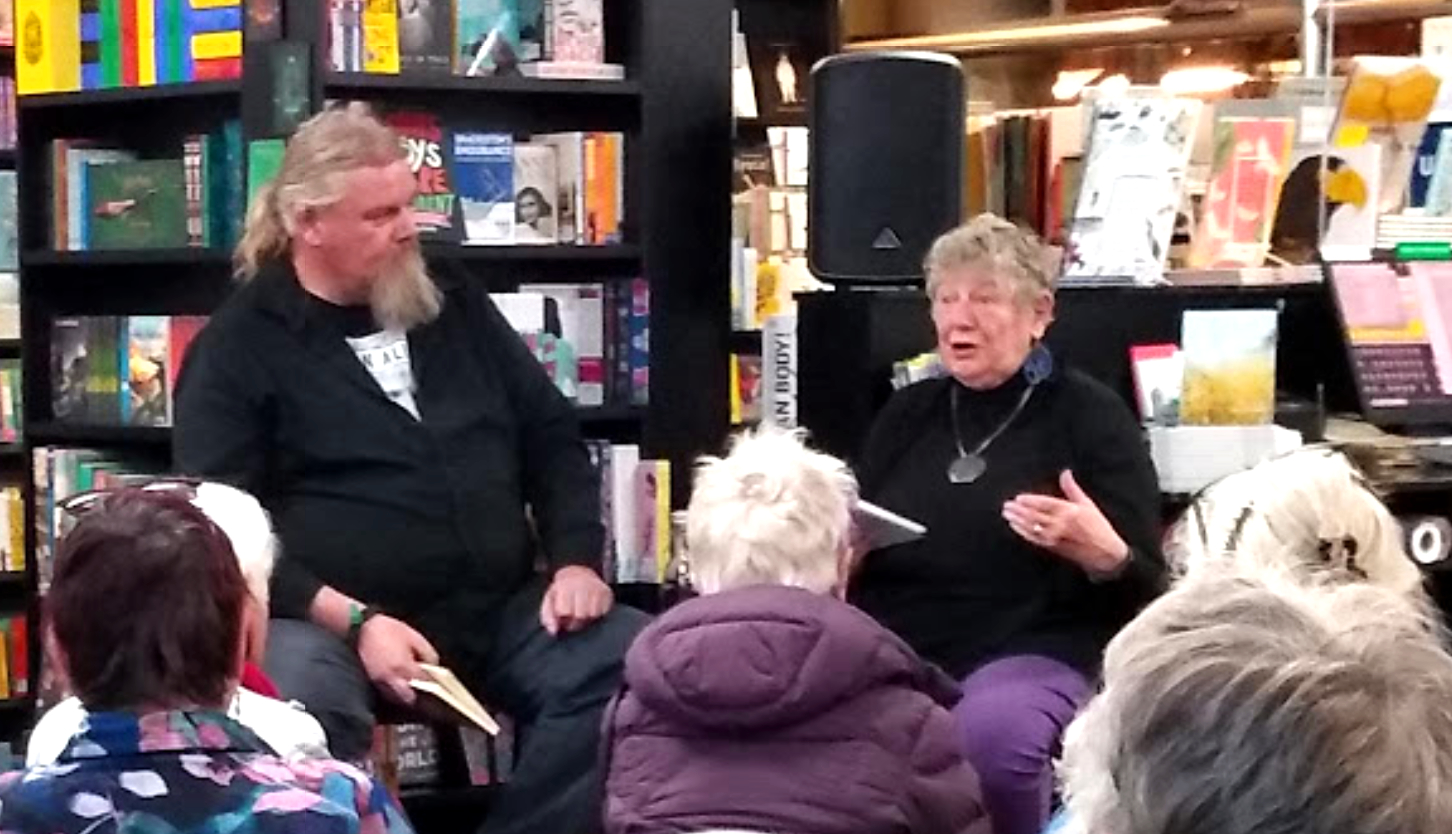