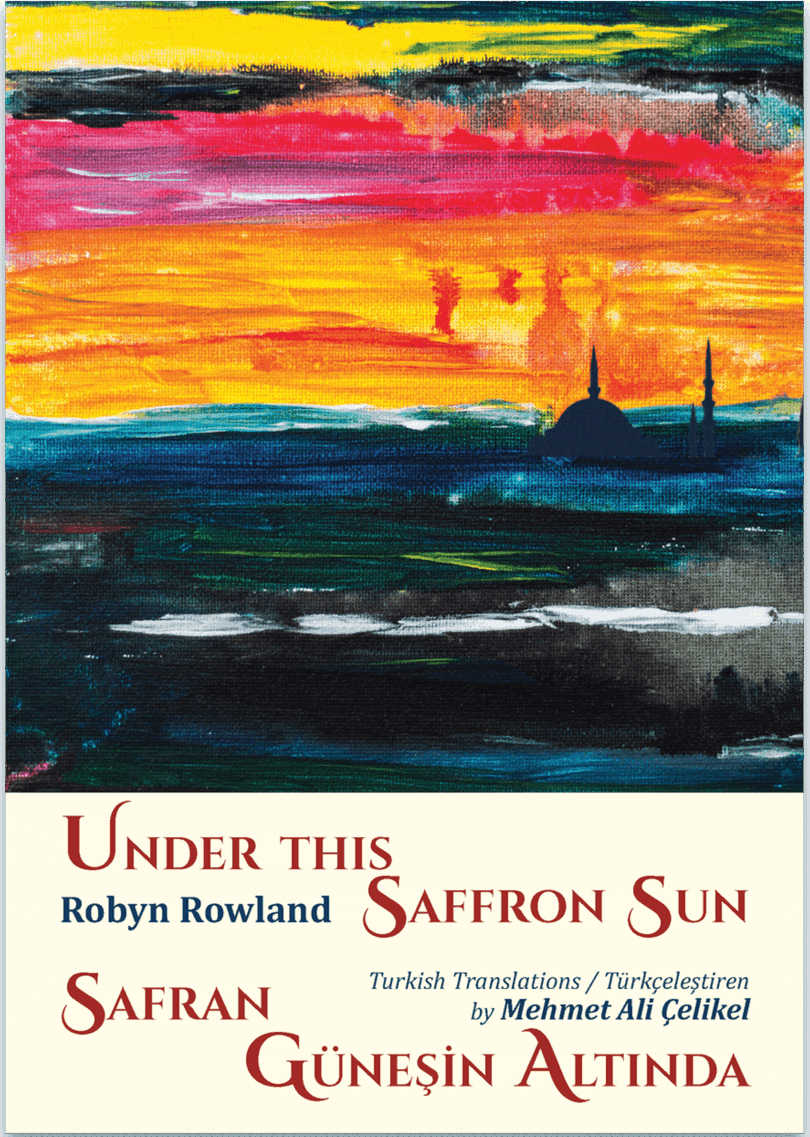 I don’t remember when I first met Robyn Rowland.

The first clear memory I have of her is hearing her read at Galway City Museum, on the west coast of Ireland, in 2006. I remember her announcing that she was going to read some of her Dead Mother Poems; the title caught me, made me blush while at the same time freeing up something inside me I hadn’t known needed freeing.

It might have been too late.
Gills were forming; there wasn’t much time.
Breath was water or air?
Without malevolence, she had taught me the song by rote:
One flesh, one mind, one heart, one life; and no-one to love us at all.
...If I could just swim up. Or down? I had to get clear.
(from Inside black: therapy)

Reading and rereading the Dead Mother Poems has helped me learn that there is room in poems for honesty; room to admit when a close relationship is difficult; room to express love for that person anyway. But that first, you must learn to love yourself.

So I began to learn from Robyn. And do, still.

The work of ‘getting clear’ led Robyn first to Ireland, a country with which she has nurtured a deep connection for thirty-five years; and then, in 2009, to Turkey. She went at the invitation of Sevil, her Turkish ex-sister-in-law, with whom she shares a sisterly bond. Under This Saffron Sun is a book about Turkey. In the book, the country itself becomes like the woman; a beautiful, nurturing sister to the poet. It is fitting that the book begins and ends with poems for Sevil. In the first poem, Sevil’s Gift: Turkey, she writes:

“See resemblance in difference.” An idea, indeed a plea, which is repeated throughout this book. Sun is a collection of poems about what connects all people, regardless of their country or culture. Here is an example, from Night Opening on Istanbul:

Our fingers begin to freeze at the end of raki-fluid limbs.
Under a blood-full moon, rising whole, uncut by cloud,
waves of light are thrown onto river and dome.
This moment difference dissolves. A warm union binds us.

This beautiful idea of finding common ground is an important one for our world right now. It’s interesting, too, that Robyn’s poetic journey has taken her from a place in which defining yourself means drawing healthy boundaries between yourself and loved ones, to a place in which defining yourself also means allowing those boundaries to melt away in moments of understanding, of shared grief and shared bliss. A very moving maturation is reflected here.

...Fish-soup with herbs,
broadbean and artichoke bake, dolmas wrapped in
your own soft grape leaves. Breakfast brings green cilli,
red spices, your olives and their oil, cheeses, tomato, cucumber
...food is the language of kindness.
(from The Stretch of Love)

Under This Saffron Sun is a complete feast for the senses, full of colours, textures, patterns, tastes, smells and sounds. It’s a rapturous read.

The book glides seamlessly between focusing on personal relationships (including with Robyn’s younger son and with Sevil), war and refugees, dancing and lust. All of life is here. There’s also a poem dedicated to the book’s translator, Mehmet Ali Çelikel. Each poem appears on the left-hand page in English and on the right in Turkish. I’ve worked with poety translators and know it is an art in itself, one in which collaboration is key, and clearly Mehmet and Robyn enjoy a respectful and affectionate working relationship.

I am American, but I am not represented by President Trump. And I know that many Turks do not feel represented by President Erdogan. When a country’s leader chooses again and again to emphasize greed and hatred, it is important for poets to reflect the true culture, the true soul, the everyday grit-beneath-the-fingernails life of a people. I applaud Robyn for doing this for Turkey.

Robyn’s career has spanned fourteen books, eleven of poetry. She published the bilingual This Intimate War: Gallipoli/Cannakkale 1915 in 2015. She has read and taught all over the world. In finding her voice, she has helped so many of us find ours.

I’m delighted to recommend Under This Saffron Sun, which celebrates both the families we inherit and the families we choose. I’m very glad that Robyn Rowland is part of my poetry family. 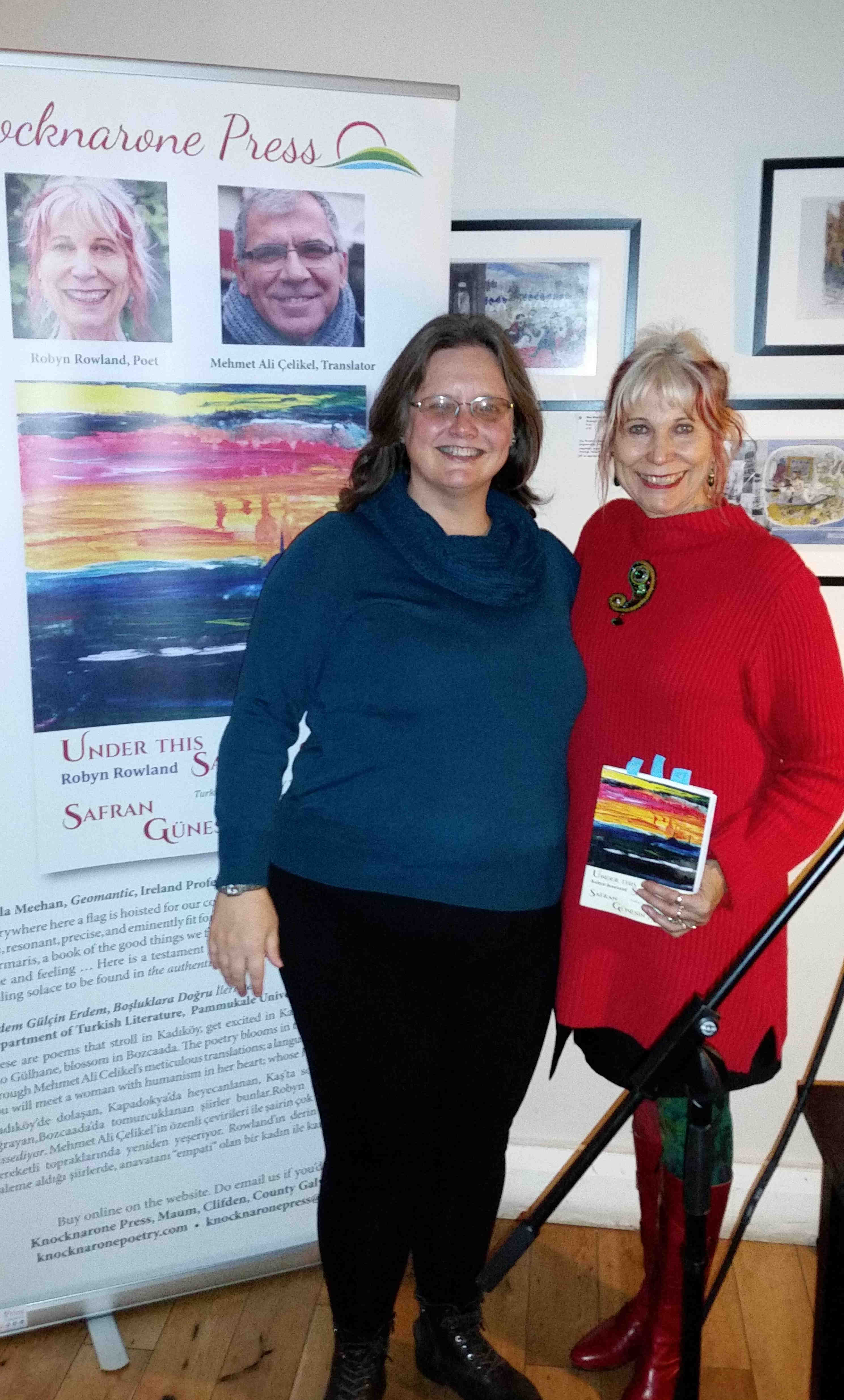 
Susan Millar DuMars is an American-born author living in Ireland. She has published five poetry collections with Salmon Poetry; the most recent, Naked: New and Selected Poems, appeared in 2019 from Salmon Poetry. Naked has been featured in The Irish Times and Poetry Ireland Review as well as at the Poetry Flash readings in Berkeley, California. Susan and her husband have coordinated the celebrated Over the Edge readings series in Galway, Ireland since 2003. In 2020, Susan received an Irish Arts Council bursary to support her as she completes work on her second short story collection, Cameos. Susan blogs at Susan Millar DuMars Is Lucky


Robyn Rowland is an Irish-Australian citizen and has been living in both Connemara and Australia for over 20 years. She regularly works in Turkey. She has written 15 books, 12 of poetry.

Four of her books came out of the Irish landscape and history. Then her interests were caught in Turkey and the old Ottoman Empire. In 2015 came the ground-breaking history in poetry, her bi-lingual This Intimate War Gallipoli/Çanakkale 1915 – İçli Dışlı Bir Savaş:  Gelibolu/Çanakkale 1915 (republished, Spinifex Press, Australia, 2018). Turkish trans. Mehmet Ali Çelikel.

Robyn’s most recent book Under This Saffron Sun / Safran Güneşin Altında, Turkish translations Mehmet Ali Çelikel, returns to Turkey; capturing place, friendship, change and uncovering the similarities between peoples which unite us all, rather than divide. It gently alludes to Syrian refugees, to the desire for peace and for stability, to hold onto the things which bind. Mostly, it is about friendship, ‘different ways with love’ and place.