Waiting for the fire 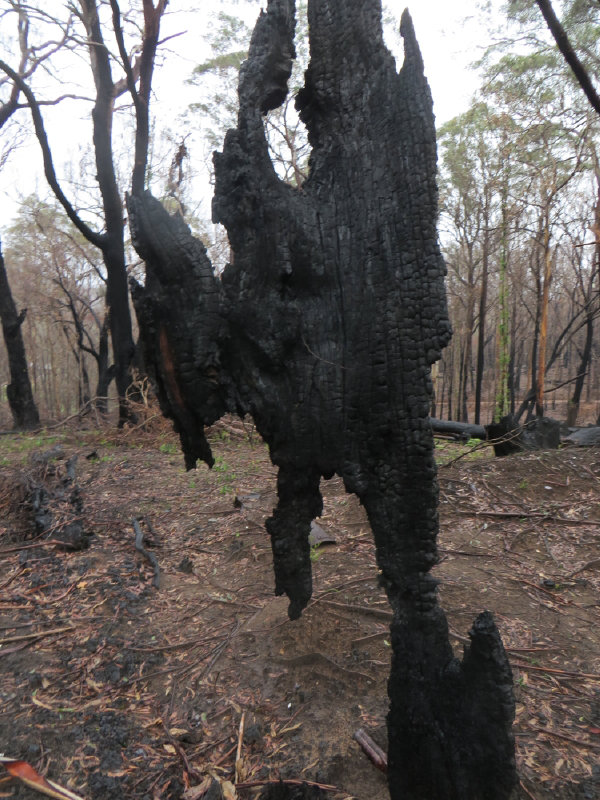 Monday night 30th December was our time. Monga National Park, which our 115 acres adjoins, had been burning for more than a week. Historically it was never thought fire would come from the east but this was now considered inevitable. Nicola was in Braidwood with Bon the dog. I had come out in the morning to continue preparing the place. It was going to be 38° with NW winds. More raking up of bark, filling gutters with water, all that. You could see the smoke puffing up in the forest (magnificent tall forest that hasn’t burnt for 80 odd years.) It was hard to tell how close the smoke was but then it would darken in colour and feel very near indeed. About 2pm I needed to know exactly where it was and walked up the back to find it creeping down into our farthest gully. ‘Creeping’ makes it sound less scary that it was. I got spooked and rang triple 0. They asked if I could see flame. I said no and in their wisdom they decided I didn’t need any resources. Just after that, this amazing cavalcade of about 7 unofficial firefighters (mosquitoes) roared up. Utes with water tanks and pumps on the back. Locals and neighbours. I didn’t know most of them and hadn’t asked any of them. A very heartening experience. But the fire was on a slow timetable and after a couple of hours they all drove away again. More waiting. So much waiting… and now it was dark. The mosquitoes’ idea was we should all get some sleep. I tried lying down on the bed but after 10 minutes felt no this isn’t a good idea and went outside to see the whole place bathed in an orange glow (this being about 11pm). Rang triple 0 to get a fire truck which duly arrived and a couple of mosquitos turned up and on we waited. 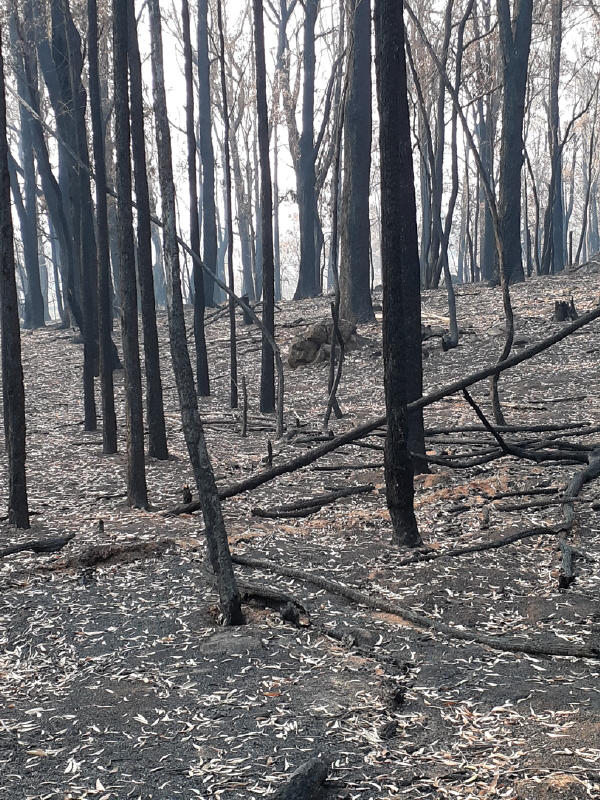 Finally the front started to come to the top of the slope behind us sometime after midnight. One of the firies went to look at Nicola’s writing space, a wooden octagon, and reported the fire was working its way round it. (We had both decided this structure probably wouldn’t survive.) Then they decided to light a little backburn from the containment line east of the house… which went very gently up the slope and met the fire. The fire truck stayed around till they felt it was safe for them to go and then I was on my own again... not the best feeling when the fire is working all round you. Anyway I rang my trusty neighbours and they came out at 4am and helped hose down some massive trees and we worked hard making sure my writing hut was OK. And so on till dawn. By morning it was only the adrenalin keeping me on my feet, having had no sleep whatsoever. The wind had moved round to a gusty sou-easterly and several fire trucks turned up about 9 am (local guys I knew as I'm also in the RFS: they were certainly aware of this place and worried about it... proximity to forest and wooden house not being a good combination!) They then put backburns into action to secure the containment line north and south of the house. So by mid-morning it was looking a lot better and the immediate danger had passed. Truth is we were beyond lucky that the wind was blowing NW all night and the fire was moving east-west so it had been coming slowly and not at maximum ferocity. Some folk have had to face 30/ 50 metre flames which would have been impossible to fight here. So all the ember was being blown back over the fire and we didn’t have any landing round the house and causing spot fires.

After the firies had gone, I went up to have a look and found Nicola's writing hut had survived. And that a giant tree had fallen into our main water tank so we now had no running water... a minor irritation. 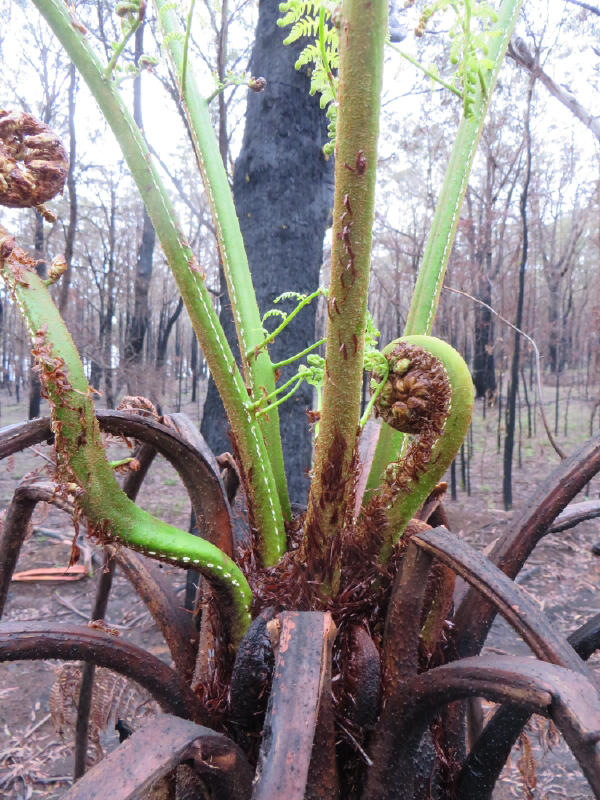 Then Nicola rang up to ask mid-morning if I’d eaten anything. I said not really. (Truth was my mouth had been too dry!) She thought I sounded pretty much like a zombie so came out with some food. She was met at the bottom of the road by a fire truck and they escorted her up the lane. The fire was looking pretty ugly either side of the road and they were worried it was about to run hard out of the forest with the wind blowing SE. She managed to drop off the food and got out fast. The neighbour reported a couple of spot fires on our northern fence which I checked out. No problems there. I chain-sawed a tree that had fallen over the containment line. Around 2pm I was having a cup of tea and thought maybe better check what's going on. I had the water tank on my trailer at least. I discovered fire racing across our paddocks. I'd been oblivious to the fact that it had screamed out of the forest lower down on our place (where they had been worried about it) and I was encountering the northern edge of that. I couldn’t believe I had to have another go. Luckily other folk and a grader materialised out of the smoke and dust and it wasn't hard to get on top of it.

I drove out that evening with one gate post turned to charcoal. When I came back next morning the other had gone the same way.

The truth is if the fire had come through on the night of the 30th the way it came through the next morning we probably wouldn’t have saved the house and huts.

As it is, we are lucky enough to look out at some unburnt country, our garden and big ribbon gums, but the forest behind us has all been burnt. Many huge old trees are gone, there’s no understorey left and the forest floor is dirt and ash. We still have some green canopy but further south, where the fire roared through, everything is cooked, black to the tips of the trees and there are no leaves on the trees. Our wombats seem to have survived amazingly well, birds are flocking in from the burnt areas and we’re putting out plenty of food for all of them.

The forest will take decades to recover, if indeed it ever does. People also will take time to recover. Just about everyone in Braidwood has been affected one way or other and the level of care and connection in the community has been frankly amazing. If there’s anything positive to have come out of all the destruction it’s that sense of connectedness. 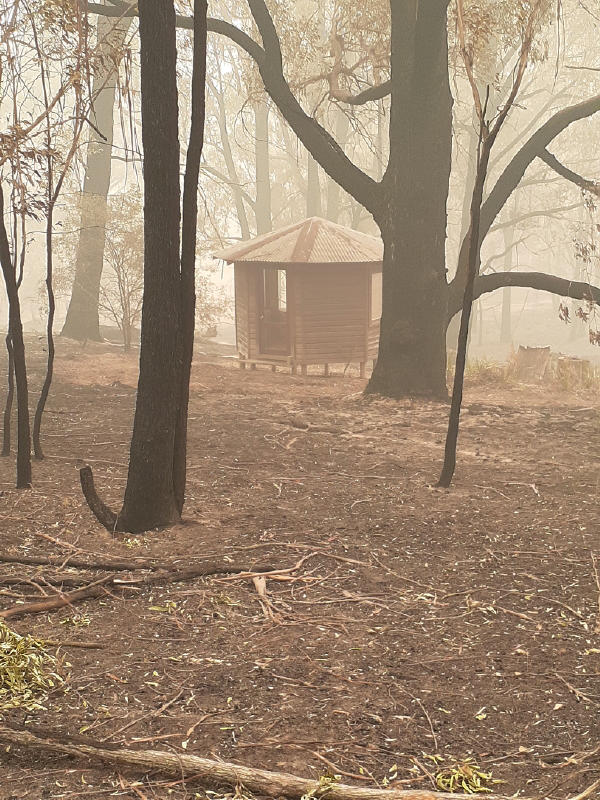 Harry Laing is a poet, children’s author, creative writing teacher and comic performer with a passion for poetry, comic performance and for teaching. His forthcoming poetry collection is entitled Unsettled (Walleah Press, October 2020). He maintains a website presence at Harry Laing