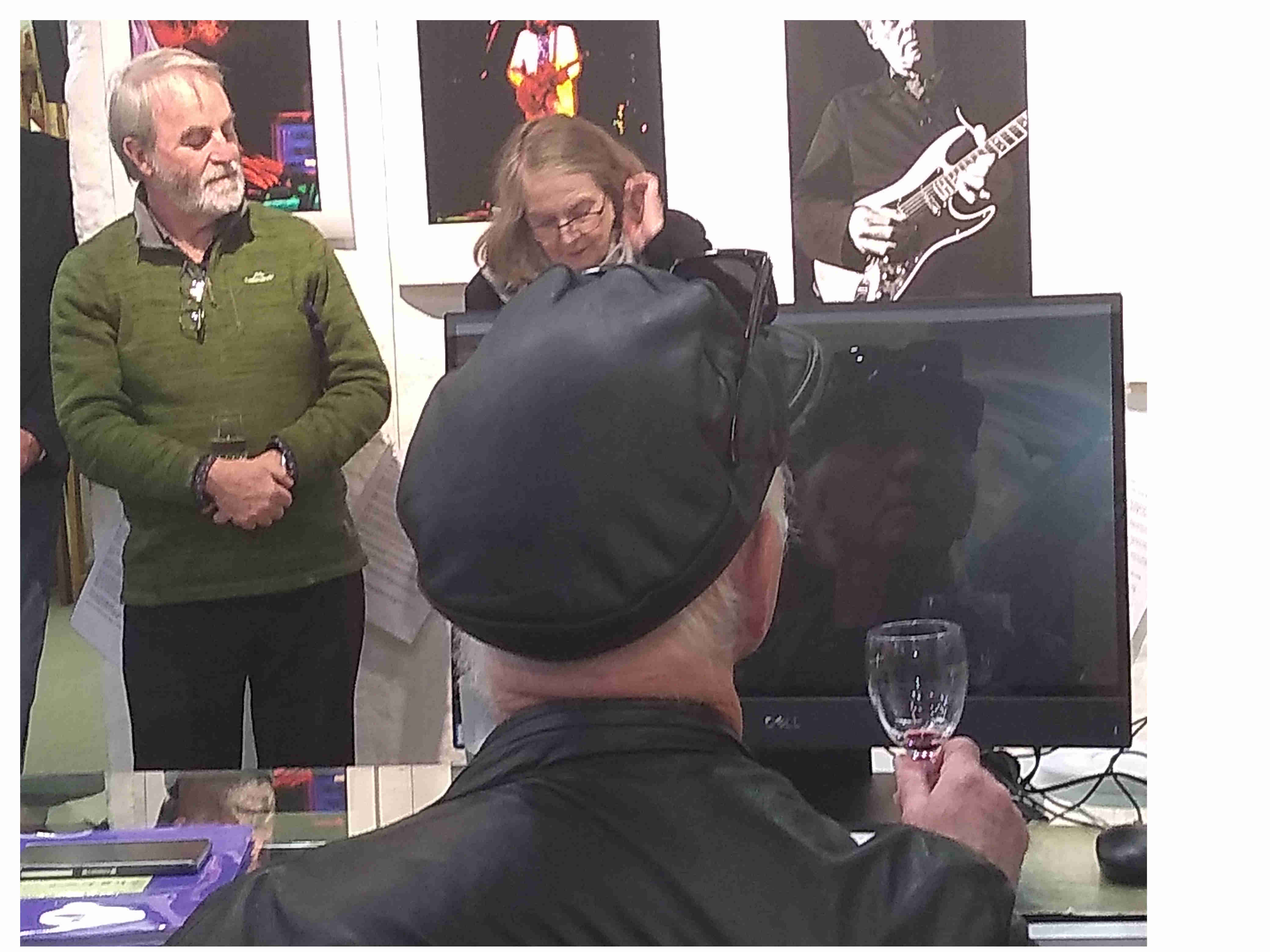 Good evening everyone and welcome to Musical Heroes – Giles Hugo’s third solo photographic exhibition. My name is Anne Kellas and I thank Greg and Betty Nolan of the Nolan Gallery for asking me to launch this exhibition. First, a disclaimer or two: I am a poet not a photographer and I am very aware there are probably photographers in the audience tonight but I shall do my best. Second, I also happen to be Giles’s wife and so I run the risk of putting my foot in it by either sounding biased or by saying something terribly wrong. However: Giles, being a former journalist, has fact-checked what I have written. Facts, however, should never get in the way of the truth according to JM Coetzee, and on that basis, I am proceeding bravely where angels fear to tread.

Those words of Elliot Landy, one of Giles’s rock photographer heroes, apply to this exhibition so well. You’ll be moved by these images, which are so deftly accompanied by Giles’s brilliantly illuminating amusing, poignant notes. 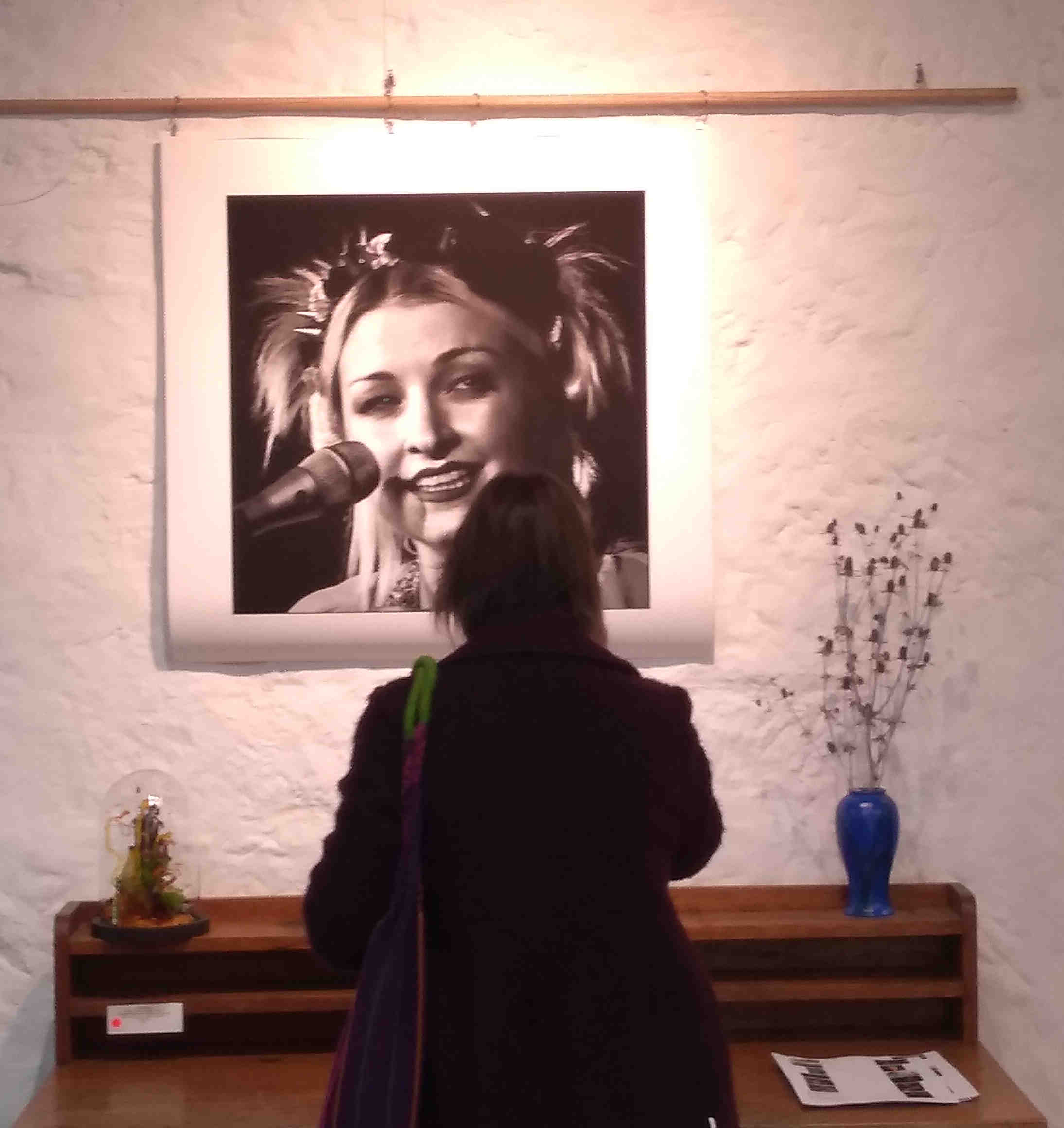 Where angels fear to tread … Perhaps rock concert photography is the province of a recording angel ever present, watching impartially? If so that recording angel has surely visited Giles in the way he’s brought to us here tonight a visual music of rock. Rock photography is surely one of the hardest acts for a photographer to perform, going into the heat of a battle of sound, with all its complicating logistics, the vagaries of lighting for example. And he has done it with such apparent ease: It was only one month ago that Giles got a call from Betty to do this exhibition. It just so happens that for the past few months, Giles has been going through his photographic archives in order to put together an e-book of his work. Archives that extend back in time for over 50 years. What you see here tonight goes back to 1969. A chapter in his proposed e-book will be called HEROES, and having already worked on selecting images for that chapter made the task of putting this exhibition, of musical heroes, possible at such short notice.

Giles tells me he aims for unposed moments that will capture something typical about the performer – typical either in gesture or body language, or the opposite: something out of the ordinary. But in effect, what he does, in my opinion, is something far more mysterious and beautiful and extraordinary.

We follow Giles as he like some kind of Alice, takes us through the looking glass to show us life on the inside of the performing artist, inside their very own world of sound. 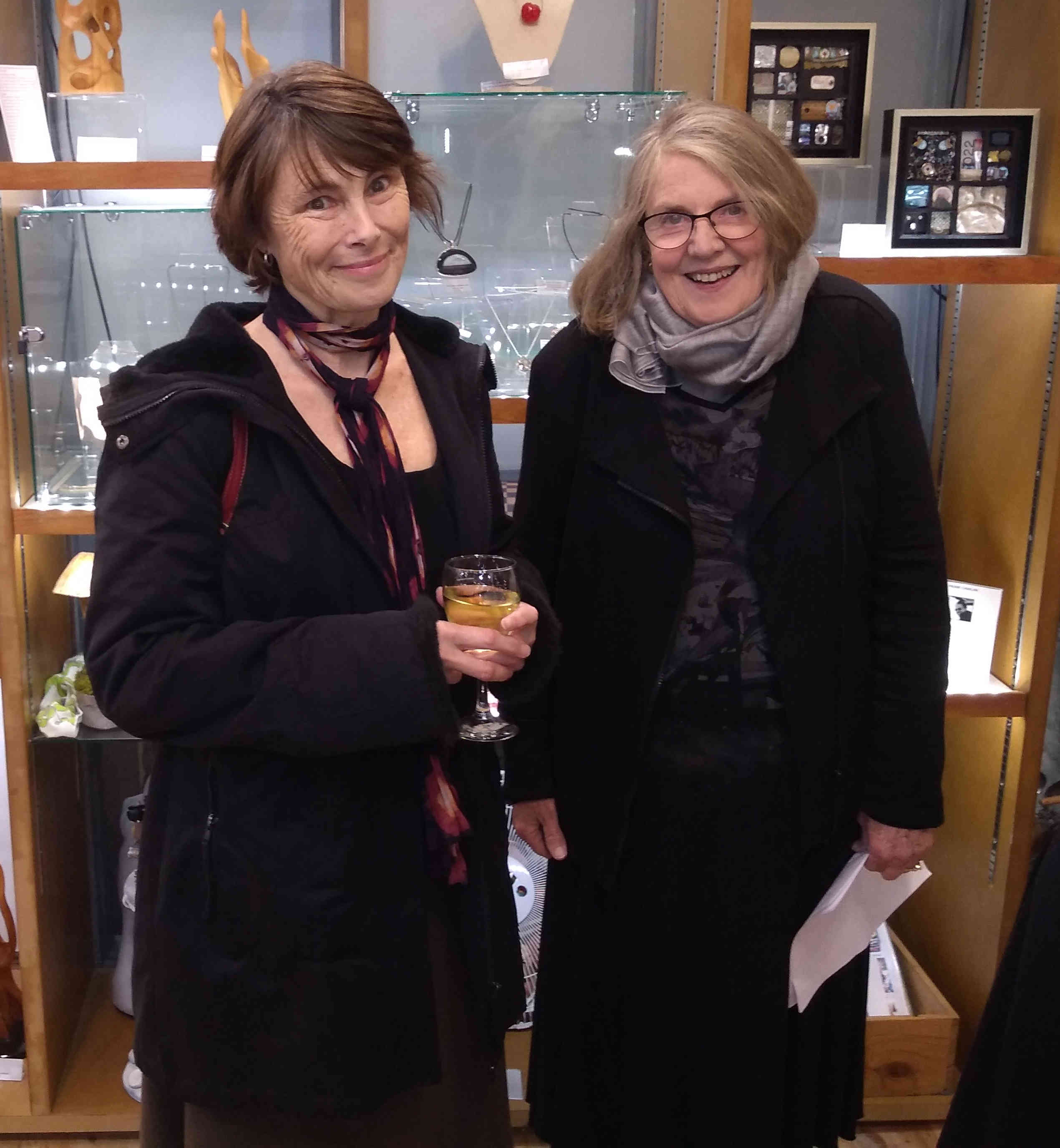 I know because I have been with him to many of the concerts represented here, that Giles experiences silence at a rock concert: he is so intensely focused on the musicians as he stares down the lens at them, that he sacrifices the very experience you and I have of a rock concert: he sees it – and feels it – instead of hearing it. He leaves everything behind him as he goes right into the lens as far as he can go. Until he is face to face with genius of one kind or another. In the viewfinder he gets right into the powerful energy of a rock concert, into the energy of the performers’ creativity, into the energy of art in the making, as it is happening, All his senses are subsumed to the visual alone: the sweaty, sticky, hot, rainbow coloured, impossibly loud air. I really love his photos. In them we are witness to something both very public and very private all at the same time, in the artist lost in his art, eyes closed, mid-note. On stage but alone. Giving out but retreating.

To borrow from Margaret Atwood some words she intended to describe the nature of writing:

the nature of Giles’s photography is “to do with darkness, and a desire, or perhaps a compulsion to enter it, and, with luck, to illuminate it, and to bring something back out to the light.

Something deeply interior is brought back to us. Although each photograph has the air of a chance encounter about it, of an ephemeral, fleeting moment, these unposed unrepeatable moments are imbued with story, with a history, with a narrative. 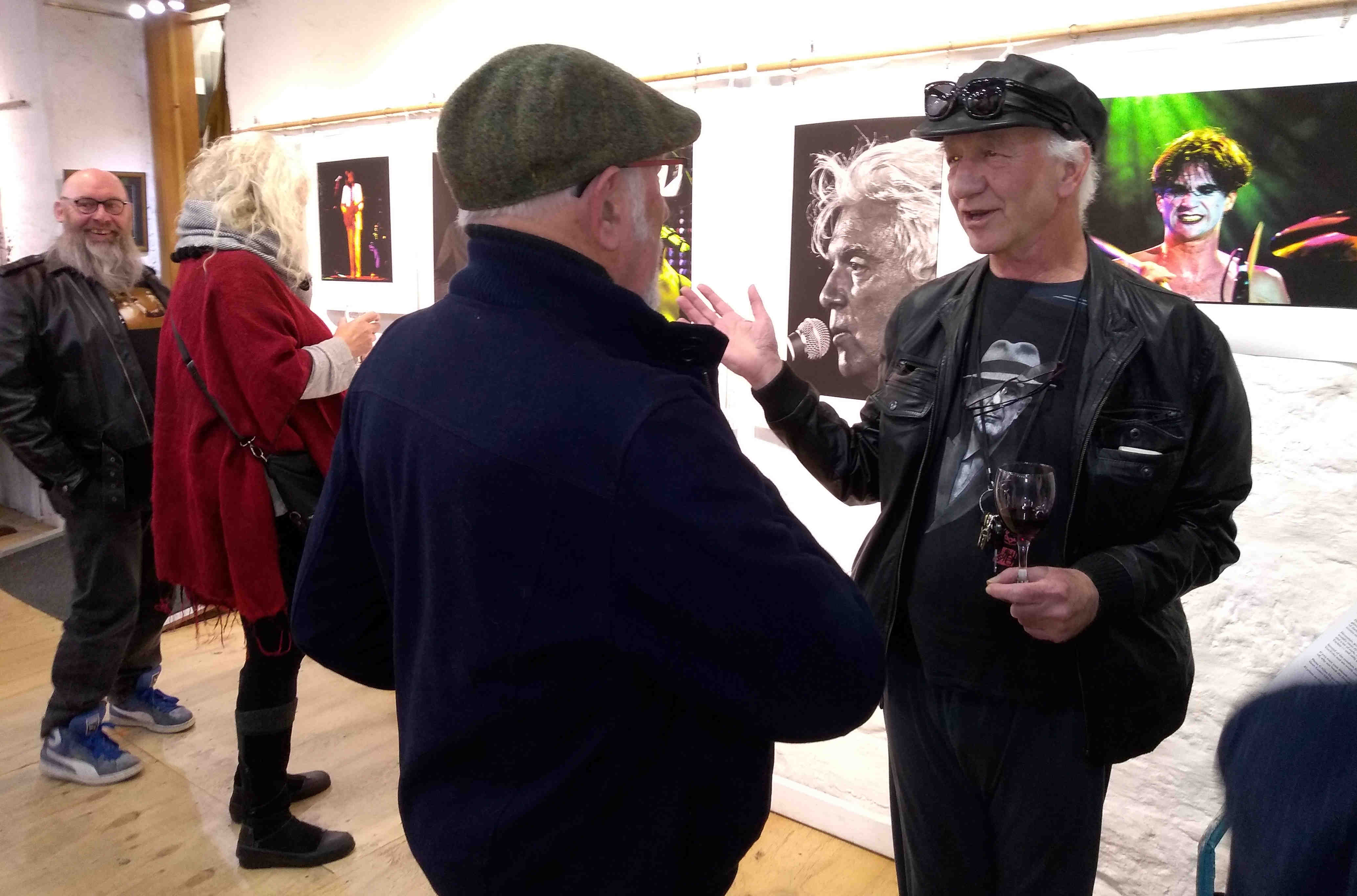 What we see is not so much an instance of time, but a moment of sound, captured using the sustain pedal: and it is pressed down LOUD. Brian Ritchie’s breath is carrying a note from over on that wall to Philip Tabane over here where Tabane is using his voice with its haunting African lilt as if it is an instrument, intoning in Venda. He’s a kind of genius spirit of a man channelling Africa to us; a kind of African Jimi Hendrix. The notes explain how he and Giles became close friends across apartheid’s great divide, during our time living in Johannesburg. Again, do read the notes for their rich contextual contribution to the imagery.

Giles has had love of African music since childhood listening to radio stations that most whities like me never even knew existed. In time, he had his own column in a Black newspaper in South Africa devoted to music, under the byline, Selig Oguh (his name spelled backwards). Our elder son Daniel has been encouraging Giles to use his archive of black and white photographs to document his experience of apartheid South Africa. Something of that future exhibition is here in Blind Man’s Blues, for example. It’s a portrait that to me is bestowed with a kind of chalky sunlight as delicate as the powder on the wings of a moth despite its harsh street setting.

In the end, what is brought back to us from beyond the looking glass? For each photograph you could say Giles portrays the artist-performer in action in a way that captures what Brett Whiteley called the artist’s work of “difficult pleasure”. Each of these musicians is performing a kind of balancing act with difficult pleasure, and is doing so with consummate poise and grace, as with the Amanda Palmer photograph.

To me the most powerful thing about Giles’s work is the sense of feeling that comes through these images. Giles is a man of immense feeling and heart (though he does everything to disguise this). The over-riding quality, the quintessential feeling portrayed here comes from Giles’s (and our own – the audience’s own) appreciation of the music. Giles makes it possible for us to feel the feelings that come from the performing artists themselves, and it is no trick: Giles has not put the feeling there: that he has simply recorded it, revealed it, illuminated it. That is Giles’s genius. 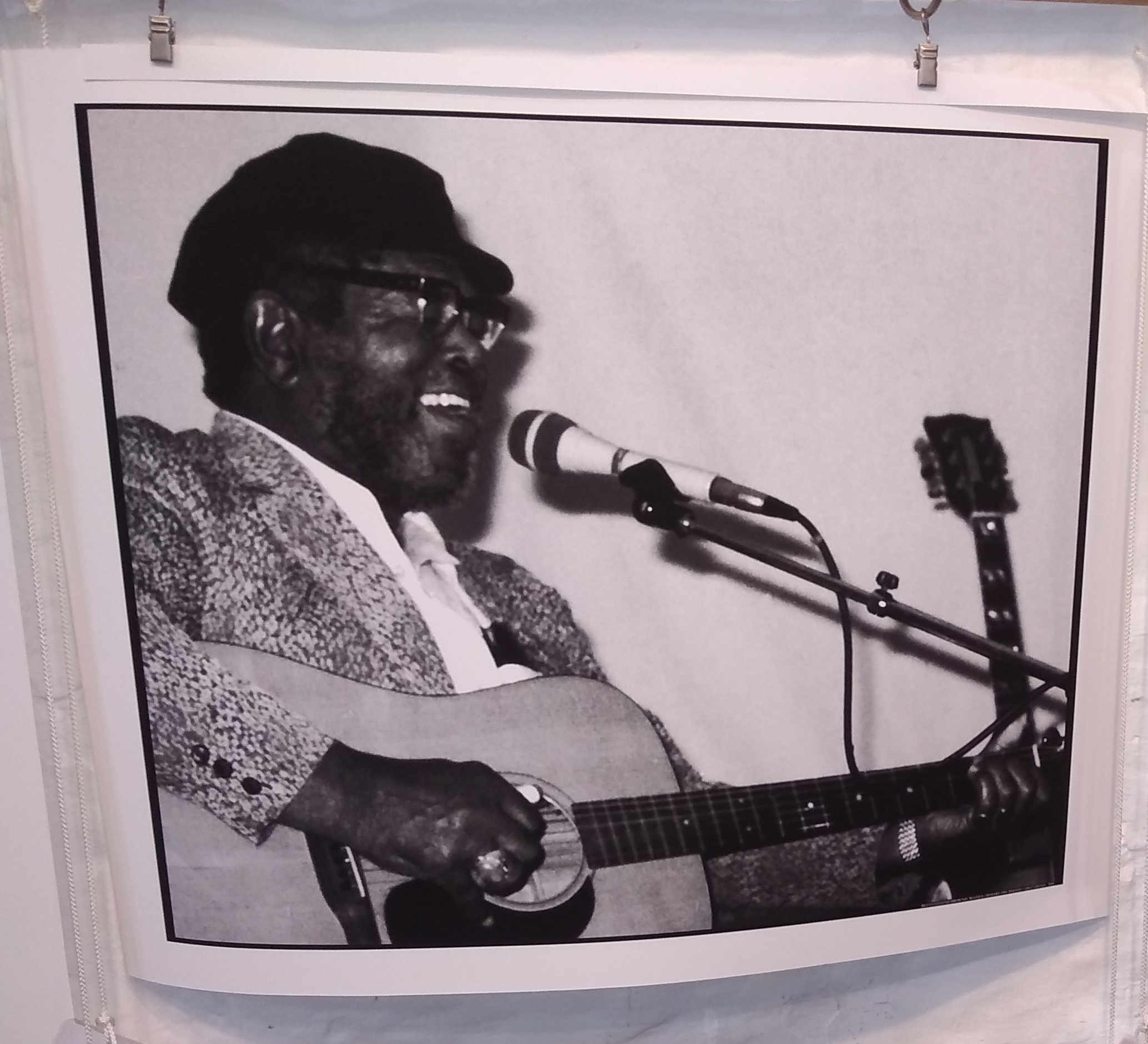 Then again in some of the photographs, the feeling is one of unbounded joy, love. Ray Charles, Jimmy Cliff. And nothing can beat the kind of childlike, utterly mad exuberant joy of feeling in Brian Viglione’s face.

This exhibition gives us only a sampling of what I know to be a large body of work. To be able to bring some of Giles’s photography together in this exhibition, to be able to make it public through this unique gallery is a special thing and for this I am so happy for Giles and so proud of his achievement.

I look forward to his e-book and invite you all to join me in congratulating him on a wonderful exhibition.

Anne Kellas is an Australian poet living in Tasmania. Born in South Africa, Anne has lived in England, Swaziland and, for the past 30 years, in Australia.

Her book, The White Room Poems was shortlisted for the Margaret Scott Prize in 2017.

She writes full time, and has taught poetry at tertiary level. She regularly holds poetry workshops, edits and reviews books and mentors poets.