I’ve been trying to pinpoint when Anne and I first began a personal connection through poetry. It was well before the launch of Removing the Kimono. I think it dates to when I attended a reading where Anne was discussing and reading from Massaging Himmler. Great to hear that this work is finally being published Anne, and not before time! Hybrid Publishers are releasing it in November this year I believe?

This launch speech comes with a disclaimer: everything I am about to say is subjective!

Some books nestle more intimately in the hand than others. Two green parrots is a case in point. It’s size is companionable, the cover’s shimmer-gloss caresses the fingers, and the modest almost self-effacing font of title and author allows the cover image to vibrate more powerfully in the foreground. 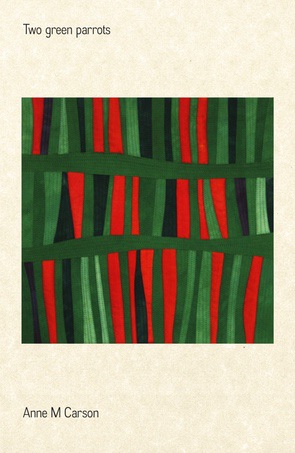 Anne’s painterly eye has chosen a felicitous cover image. Brenda Gael Smith’s textile painting, Flying Colours: King Parrot, is a dance between rythmn and colour, beautifully complementing Anne’s lyrical poetics. It is a serendipitous example of how content and cover image can reflect and deepen each other. Alchemy comes to mind and indeed Anne references alchemy in at least three poems. But even without these particular instances it is clear that the collection is engaged with states of being, states of change. Complimentarity and contrast take flight in the two green parrots that “wing across a granite sky/Grief and hope together again, as close/as fingers on a hand, feathers on a wing”. Contrast and complementarity hum visually too in the cover image’s red and green, opposites on the colour wheel, strong in their intensity, complex in their effects.

This visual hum — conveyed in the varying wavelengths of the abstract feathers — conjures up for me the variant tonal richnesses of the Medieval musical modes: the Ionian, the Dorian, the Phrygian, the Lydian, the Mixolydian, the Aeolian and the Locrian. But whether major or minor, in harmony or not, the musicality of the poems plucks at attentiveness. The quality of attentiveness is central to Anne’s poesis. She affirms this In the artist statement on her web page, annemcarson.com. “Poetry (she says) grows out of a lithe attentiveness to oneself and the world”. She expresses this equally directly in the poem, Calling the world into being (page 75):

“We’re practising attentiveness, soft focus; poet skills I’m thrilled
to pass on. I call the thing into space between us, invoke it

by repeating its humble name: coffee machine, cup, sugar,
Freed from competition with the plethora, they come into

their own selves, distinct, vibrating with simple presence.
We’ve entered the place where things respond to hallowing:”

Anne hallows various life forms, events and presences in the collection, including the work of other poets: May Swenson, Denise Levertov, and Stanley Kunitz among them. In one instance, Anne hallows a Ted Hughes poem, her marmalade fox becoming a “thought fox”, paying tribute to Hughes’ poem The Thought Fox, in which he too hallows the process of calling into being. And in the poem Two green parrots, the line “What do humans know of the calls of birds?” subtly evokes Dorothea McKellar’s poem, Two Japanese Songs, in which McKellar asks “What does the bird-seller know of the heart of a bird?”. The hallowing in McKellar’s poem, however, is caused by loss rather than creation:

“…the real bird has flown away, very far away over the rice-fields.
There is only the shadow-body in the cage.

What does the bird-seller care for the heart of a bird?”

Anne’s attentiveness is wide ranging. Art, music, poetry, indigenous practice, trees, seeds, birds, clouds, veraison, Petrichor, travel, relationships, life, death, moments of valour, of revenge, and more, come under her scrutiny. From my very first reading of Two green parrots, I found a resonance between Anne’s processes and concerns and those of Diane Ackerman, the American poet, naturalist and essayist. These include biophilia, defined by Edward O. Wilson as "the urge to affiliate with other forms of life". But more particularly it is Ackerman’s fascination with the concept of Deep Play which seems to me to be very much at one with Anne’s approach to poetry making.

In her book of the same name, Ackerman contextualises Deep Play in this way:

“look closely (she says) at the human saga, and consider how much of it revolves around play. Basic play, elaborate play, crude play, sophisticated play, violent play, casual play. Most animals play. Evolution itself plays with life forms. Whole cultures play with customs, ideas, belief systems, and fashions. But it’s a special calibre of play — deep — that leads to transcendence, creativity, and a need for the sacred. Indeed, it’s our passion for deep play that makes us the puzzling and at times resplendent beings we are.” (p.26)

In turn I believe Ackerman would concur with Anne’s belief in “the potential of the Creative Arts to contribute to culture-making; the development of values and the making of a more humane, fairer world”. This is expressed by Anne on her web page and is demonstrated in her poetry.

Neither Diane nor Anne treat their fields of play blithely. Both accept that dislocations, emotional quagmires, gravel rashes and deeper woundings, accompany deep play. Conflicts and concessions abound and most often the remaking is of the poet rather than the subject. Consider the final stanza of the poem Mother-stone is womb on page 57, where the persona’s previous perception of Lake Mungo is transformed:

“What I took to be sand dune and random rock has turned
into a quarry with workstations and knappers plying their
trade, … — while I watch it comes to life, morphing
into three dimensions, gaining depth of field, veracity.”

This shift in perception is taken a step further in the poem Axiology, on page 43. Axiology in philosopy being the study of the nature of value and valuation, and of the kinds of things that are valuable. Let me explain a ittle about the significance of the Japanese practice of kintsukuroi: it treats breakage and repair as part of the history of an object, rather than as something to disguise.

One of the aspects of Anne’s poetic practice which I most appreciate is her delight in the vagaries of creation, its griefs, joys, frustrations, its successes and failures, the poet as much shaped by the poetry as the poetry is by the poet. It’s a process akin to “a sacred act which holds us together” , to quote again from Anne’s poem, Calling the world into being. (p.76).

I’m going to conclude at the Prologue and the Epilogue. I was disarmed by the fact that Anne opens the collection with horse percussion, “the clip-clop percussion/of horse’s hooves as they strike/bitumen.”, rather than with parrot chitter,-chatter as might have been expected from the collection’s title. Although Anne says in the first line of the prologue poem, On being taken there, that “Anything can take you there — “, she has chosen to capture reader attention through muscular rather than soft sound. By contrast the Epilogue is in quiet mode, the equivalent of a meditative gong, the empty space within the parenthesis acknowledging that what is to come has no title, is yet unknown; and only after all sound has ceased, “After the last/bird farewells the day.”, can a new poetic embryo emerge:

It is my pleasure to invite you to enter the world of deep play in Two green parrots and I congratulate Anne on bringing it to life.

Patricia Sykes is a poet and librettist. Her poems and collections have received various nominations and awards, including the Newcastle Poetry Prize, John Shaw Neilson award and the Tom Howard Poetry Prize. Shortlistings include the Anne Elder, Mary Gilmore, and Judith Wright Calanthe awards. She has read her work widely, inlcuding on Australian, Paris and New Zealand radio. It has also been the subject of ABC radio programs, 'Poetica' and 'The Spirit of Things'. Her collaborations with composer Liza Lim have been performed in Brisbane, Melbourne, Sydney, Paris, Germany, Russia, New York and the UK. She was Asialink Writer in Residence, Malaysia, 2006. A selection of her poems was published in an English/Chinese edition by Flying Island Books in 2017.