We are here tonight to celebrate the publication of Lyn Reeves’ Field of Stars.

Lyn is a poet who as publisher, editor, teacher, and mentor has had a large role in the world of Tasmanian and Australian haiku. Since becoming interested in haiku in the early 1980’s, Lyn has worked to give Australian haiku a voice. In the 18 years that she served as Haiku editor, Famous Reporter published almost 1400 haiku – and some of those poets are here today. She is the current editor for the online journal Echidna Tracks: Australian Haiku and is Vice-President of the Australian Haiku Society and leader of the Watersmeet Haiku Group.

When we talk of haiku the traditional definition of a small nature poem of 17 syllables always rises to the surface. But today’s haiku are brief – it is hard to find a successful contemporary English language haiku of more than 13 syllables.

It is not the counting of syllables that makes a haiku. It is the breath and scope of engagement with the natural world.

With the ‘now and here’, as the American poet Jim Harrison puts it in his poem ‘After Ikkyu’ – Not here and now but now and here. In her introduction to Pardalote Press’s 2005 Watersmeet: Haiku, Lyn wrote:

“A haiku is a short poem. Traditionally it was written in only 17 syllables and dealt with nature, usually in reference to a season. Haiku usually gain their effect by suggestion. They present a clear-cut picture, which serves as a starting point for trains of thought and emotion. Because they are so short haiku rarely try to give the picture in detail. Only the outlines or important parts are drawn and the rest the reader must fill in. In this way they resemble Japanese ink sketches. A successful haiku will cause a ripple effect in the reader’s mind, revealing deeper layers of meaning than the words at first seem to express”.

Lyn’s haiku are opened ended invitations for us to see what she has seen - to pause for a moment or two and return – with an enhanced appreciation of the world in which we live and eat and work and walk and be. They shimmer with light and insight, like a Field of Stars. Field of Stars includes a selection of Lyn’s haiku from two of her recent collaborations:

From Poets and Painters – Celebrating the Big Punchbowl 2016-2017, in which she worked with Megan Walch, are these haiku:

campfire smoke
conversations drift
into a dusk of stars

orphaned joey
tries to climb into
its mother’s cold pouch

From Small Worlds: Paintings by Luke Wagner Words by Lyn Reeves, published in 2017 are these haiku that shimmer in the same light as Luke’s luminous bonsai:

my book forgotten…
the changing script
of clouds

sound of the bell
listening in silence for the silence

And, now from Field of Stars:

Haiku is not just a poetic practice. It is a way of living in and looking at the world.

And Lyn Reeves’ world is a place for all of us.

Before handing over to Lyn I would like to thank Chris and Janet for making the Hobart Bookshop a home for poetry and the celebration of poetry in Hobart.

Thank you. Thank you to Ralph Wessman, the quiet voice giving a big voice to haiku, from his years of Famous Reporter, having published over 1400 haiku, to publishing, just in the past month or so, Ron Moss’s Broken Starfish, and the reason we are here tonight – Lyn Reeves’ Field of Stars.

My final thank you is to Lyn, mentor and teacher and friend for giving me the honour of launching this superb collection. It is one that will live in our hearts and minds for a very long time.

Field of Stars is the perfect place to explore the possibilities - the breadth and scope of haiku – in all its realities and possibilities.

Field of Stars is available from Walleah Press Bookshop, or enquiries to Lyn (reeves.lyn@gmail.com) 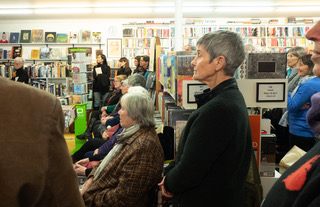