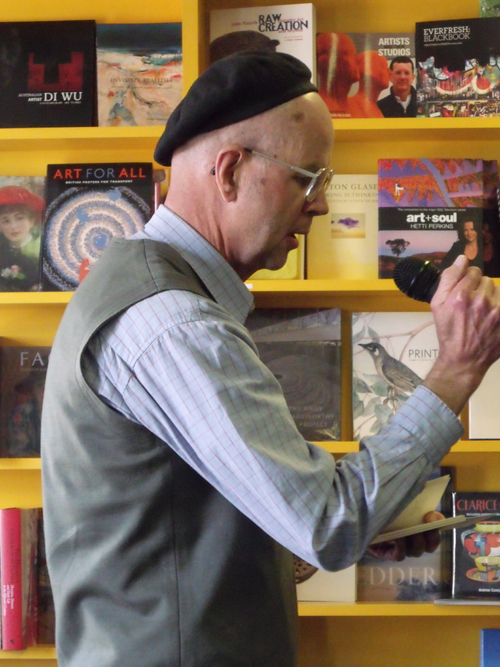 Melbourne poet Peter Bakowski was no more than a child when he underwent his first heart operation. He was fortunate: a young girl undergoing a similar operation at the hospital at the time failed to make it. It's an experience that transformed his life.

'It's given me a thankfulness for being alive. I'm grateful for the simple things, even flowers in the middle of the nature strip. I can be as irritated and irritable as anyone else - stuck in a traffic jam for instance - but generally feel I'm a very lucky person. Having a heart condition has left me very aware of mortality, knowing I could go at any time. I'd say I'm a bit obsessed by the notion of death - not in a morbid way particularly, just that it fascinates me, it's one of the great mysteries.'

Bakowski lives in Melbourne. He visited Tasmania in October 2010 as a guest of the Tasmanian Poetry Festival, riding the success of his 2009 collection Beneath our armour which was shortlisted for the 2010 Victorian Premier's Award. He'd previously won the award - the CJ Dennis Prize for Poetry - but wasn't so fortunate this time.

'Yes, I missed out' he says. 'But it's boosted sales, and offered the sort of validation you need as a writer. I found it interesting that the usual suspects weren't short-listed … I worried Les Murray's latest book being out at the same time would knock me out of the ring, but that wasn't the case. And it was a very democratic process too. It was a Victorian writers' award but the prize went to a NSW poet so I felt there wasn't any bias.' (Anna Kerdijk Nicholson won the award with Possession, published by Five Islands Press).

An inspection of the book's cover reveals deliberate fragmentation of the font used for the title. '"Beneath our armour"' is meant to suggest individual vulnerability', says Bakowski. 'One could argue that life is quite combative: we don armour in combative situations, giving the public impression we're tough ... but beneath the armour we're vulnerable. It's a part of our humility, allowing the world to touch and affect us.'

At a session of last year's Adelaide Writers' Festival, author Robert Dessaix spoke with Kerryn Goldsworthy on the subject - amongst other things - of portrait painting, Dessaix being the subject of Robert Hannaford's 'Blue Jumper' painting. It's a good portrait, said Dessaix's view - it caught something: 'not just the way I looked, he caught more than the moment. I saw a precariousness in me that I hadn't realised was so obvious.' Portrait painting's been the influence for the writing of many of the poems in Bakowski's collection; in similar vein, he's sought to explore beneath the public image of the subject of each of his portrait poems. 'The very best portrait painters convey or reveal something of the essence of their subjects,' he says. 'We use the expression "he's a thick-skinned person", but people are more vulnerable than they sometimes let on; and I'm interested in the lowering of the guard'. Bakowski's portrait poems depict both real and imagined people. 'The real ones are those I've researched, the imagined ones are where I'm trying to get into the headspace of someone perhaps quite different from myself ... maybe someone of the opposite gender, or someone with a vocation that differs from my own.'

He admits to living a wildly imaginative life, says living inside his head 'can be a little like being in a space rocket or on a flying carpet'. He comfortably fantasises about places he's never been, people he's never met, 'like trying to imagine Stanley with his entourage traipsing through Africa'. It's an imaginative questioning that allows him to reach close to the lives of those he considers artistic or literary heroes - Diego Rivera, Sylvia Plath, Billy Holiday, Charles Bukowski, Frida Kahlo for example. Andwith a sense of self less singular but multi-dimensional, he finds himself drawn to the simultaneous creativity and self-destructiveness of these individuals. 'I suppose that's the yin and yang of us all, the sort of internal tussle within ourselves that could maybe be described as the the essential versus the moral self.'

Turning to Bakowski's portrait characters, he mentions his poem about Dougal Nunn, an obsessed but fragile artist who is driven to paint. 'Dougal is on the fringe. Some creative people are observers rather than participants, astute observers of the village or national culture.'

He's driven,
been known to go without sleep for three days,
touching, sketching again, something he's found,
a feather of a cormorant,
the skeleton of an eel.

Dougal makes a once a year appearance at the pub,
New Year's Eve,
wearing the same corduroy jacket and cap,
content to listen in on
fishing talk
of record catches,
the toll of storms.
He stands us all a round.

Necessary to Dougal's painting is the need for solitude. 'There's a huge difference between solitude and loneliness, and it's something I've spent my writing life examining. There've been times in my life when I've felt very personally eroded by periods of loneliness. I find there's a gulf between the feeling of solitude and the feeling of loneliness, and it's a gulf I'm examining via some of the portrait poems. One extreme you can live with, and the other is severely eroding.'

In a visit to Hobart in 1996 when he took part in the Salamanca Writers' Festival, US writer Barry Lopez enthused how at the age of six or seven he'd sat in front of an atlas and from its pages traced on paper the places he wanted to visit. 'About seven years ago I found those pieces of tracing paper I'd drawn,' Lopez added. 'One of the places I'd marked was Tasmania. How wonderful life is, I thought, if you just wait.' Peter Bakowski's outlook, as evidenced in the lines of his poem 'Of fathers, books and libraries', is remarkably similar:

He's an avid traveller, relishes the invitations to writers' festivals and the experience of writing residencies both at home and abroad. 'What I find exciting is the environment entering the poems, it helps make a poem more authoritive. With each residency I've had away from my hometown of Melbourne, whether the residency has been in another part of Australia or overseas, there are always poems I could have never written without the experience of the residency. Residencies have inherent difficulties, of course - a concrete example is the translation of my poems into Mandarin taken on by university students during a residency in China. Having no personal knowledge of Mandarin you just have to trust that it's a good translation. Then there's the experience of reading to Chinese university students with their differing levels of English comprehension. As well, many educational institutions in China are driven to provide practical outcomes and training for their students so they concentrate on accountancy, economics, business management - not so much the humanities - and I think they often can't quite get their heads round someone like me, a writer of poetry. But that's often the case in Australia too, to write poetry is seen as a romantic but precarious existence.'

Bakowski tends to travel widely within his own country with his family Helen and Walter, offering readings - sometimes for free - in people's houses. 'Generally I find it's a very enjoyable evening based around food and poetry and conversation, in what I call the Slim Dusty, Bob Dylan troubadour tradition of reading in unlikely places. Here in Tasmania I'm reading in Mole Creek for the first time in a private house - and again in South Spreyton - all self-organised through the network I've built up. One thing often leads to another with networking, the Mole Creek invitation materialised five years ago when I was last at the Tasmanian Poetry Festival but my tour dates didn't coincide. We've finally managed to nail it this time.' He tends to conduct more private readings interstate than within the Melbourne area - 'Over this fourteen day Tasmanian tour, I'm doing five private house readings' - and overall, his experience of reading in rural Australia has been heartening. 'Any idea that the rural parts of Australia are redneck or intolerant of poetry is just not on, I've found rural Australia very open to poetry. I think what helps me is that my poetry is accessible without being ... dumbed down. The American poet Billy Collins suggests in an interview on the website Guernica that clarity in poetry is a risk, a comment I feel validates the path I'm on ... as opposed to a closed, academic sort of poetry which I think does damage to poetry.'

His love of poetry embraces poems of both a conventional length and those he terms the ultra short or 'micro poem'. 'I've become a person who loves and collects aphorisms - which have a very long history, dating back to the Romans. Sometimes I'll write a short piece when I'm stuck on a normal length poem, but that's not to say I think any lesser of the short ones. And some of us have been writing ultra short poems within the last twenty-four hours here at the festival ... a cross-pollination which could almost develop into a kind of conversation, a poetry session of very short poems.'

He suggests that while journals and websites exist for ultra short poems, some editors find it a confusing genre. 'Sometimes I send my micro poems to magazines only to get a response that says "we don't consider haiku". I can't be bothered pointing out they're not haiku. As you know, there's an art to haiku, either you know the form or you don't recognise it. Its history is wholly separate to writing ultra short - there are rules - and I tend to find rules to be like confinement, like a prison. Don't worry about rules, just try to write a very good poem is what I say. And try to write as clearly as possible. My favourite writers in the world are those I'd call clear writers - Raymond Carver, Ted Kooser, Charles Bukowski, Ernest Hemingway …. You can't beat clear and strong, you know.'

Peter Bakowski will be undertaking an extensive 2011 poetry tour of Tasmania from 17th September to 9th October inclusive. Anyone interested in hosting a private house poetry reading anywhere in Tasmania is encouraged to contact Peter via email: pbakowski at yahoo dot com. Peter Bakowski's blog address is http://bakowskipoetrynews.blogspot.com