Lawrence is a prolific poet; this exhilarating new collection is his fourth in less than a decade. As ever, I was immediately struck by his work's energy -- at once fluent and restless -- and the plenitude of its observations, an abundance which, though by no means lacking its darker side, leads you exuberantly through a catalogue of experience. One could quote at random:

Through the green bell-jar
of his lover's belly, he witnessed
the difficult workings of the womb --
how the ovaries lean away from each other
like long-stemmed wildflowers
nourished by a film of constant rain.


Dead criminals are weighted
and lobbed without prayer into water,
going down to feed bug-eyed carp
with the skin they lose in strips
when the rot sets in.

The poems frequently sound as though written at white heat, direct from the moment of the event. Directness, indeed, is one of his salient features, virtues even, both in his confrontation of experience and the language he brings to its description. As the two quotations above attest, he is a very visual poet, and the book is full of arresting images. A horse shaking itself sounds 'like a thick blanket being shaken'; bulbs are 'the deformed feet of birds of prey'.

Many poems bear witness to Lawrence's travels in Ireland, Canada, Italy, Tibet. He's forever on the move. At one level this mobility can be seen as adventurousness, a manifestation of the confident energy and abundance I've spoken of. But it also bespeaks a restlessness, a physical restlessness figuring a restlessness of the spirit. I was put in mind of the last line of Dransfield's 'Ground Zero': 'a moving target is harder to hit'. Lawrence himself quotes something to this effect in the title poem: Protect thyself from the world, it is hunting thee. Reading the book a second time, it struck me that while this poetry is full of joie de vivre, of pleasurable immersion in the world, the body and the senses, it is also edgy, nervous, as though the vigour which drives its observations, its lists, its prodigal indulgence in experience, is partly a diversion from an underlying anxiety ('The waves, birds and garbage/ become a list of grey disturbances/ through this glass'). It is at once celebratory and alienated. In their obsessive attention to the things of the world, to minute detail, their mediation of thought through physicality -- while forever reflecting and introspecting Lawrence never becomes abstract -- the poems convey an implicit horror vacui, and every object becomes a kind of memento mori, an implication made explicit in 'Genealogy' where the speaker goes through his dead father's possessions ('Be quiet and still/ among the weckage of my father's things'). These two elements, the joyous and the anxious, somehow seem present simultaneously, which results in a tension between exhilaration and -- what? -- a kind of claustrophobia. Scattered through the volume are some excellent sparer poems -- 'Heat', 'Rebecca', 'A Moon for Emily' -- like pools of calm. Their impact is considerable.

Any reservations? Like most poets, Lawrence has some of the weaknesses of his strengths. Sometimes I felt that abundance was becoming clutter, fluency was threatened by facileness. The writer's pilot light, Martin Amis reminds us, is always on. There was also a self-reflexiveness I noticed in half a dozen poems (and in a couple I've read since this book); they refer to themselves, even to their composition. That's a habit I would nip in the bud. The subeditor in me was troubled to see that on page 10 'rooves' slipped through the net.

I enjoyed this book very much. Lawrence does write poetry 'to get genuinely excited about', as the blurb says.

One concluding point. At the risk of engaging in metacriticism, I feel I have to defend Lawrence against one charge levelled at him by Peter Rose in ABR. Rose took him to task for repeating strong words too closely together, and cited two examples: '... the table's dark grains/ darkened to a panel of artless wood' and 'Its shape and intensity/ shape the poem's homage'. But the poems don't say that. Lawrence writes 'the table's grains'; there is no 'dark'. He writes 'make this poem's homage', not 'shape'. At least, he does in my copy. Bizarre. 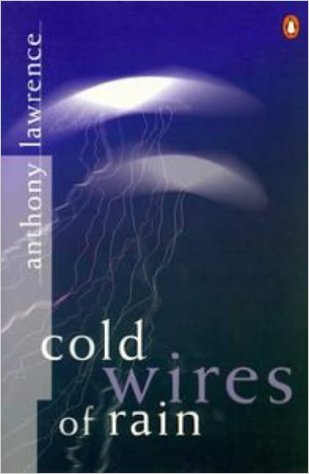